Wulver are ferocious enemies that appear in God of War (2018).

Wulvers are powerful, formidable beasts resembling werewolves that possess immense strength and speed. They can attack Kratos by charging at him, swiping at him with their paws, or extending their claws and going berserk. They also have a grab attack that cannot be blocked and inflicts continuous damage. The player needs to rapidly shake the beast off or use the Spartan Rage to get free.

Kratos can grab a stunned wulver and beat it into submission. If enough damage is done, Kratos can kill it by brutally ripping its jaws apart, splitting it in half to the waist and exposing its organs.

In Celtic Mythology, the Wulvers are a kind of werewolf that is part of the folklore of the Shetland islands off the coast of Scotland. In history, the wulver kept to itself and was not aggressive if left in peace, which is ironic considering it is an enemy in-game. Unlike most werewolves the Wulver is not a shapeshifter and is not, nor was it ever, a human being. It appears to be a sort of immortal spirit. 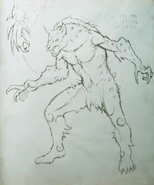 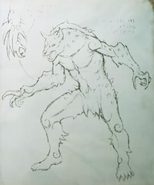 Wulver possessed by a Nightmare
Add a photo to this gallery

Retrieved from "https://godofwar.fandom.com/wiki/Wulver?oldid=114144"
Community content is available under CC-BY-SA unless otherwise noted.