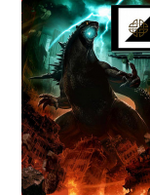 Well, Hi. I live in Abbotsford, BC, Canada. So far I have seen all the God of War stories and game walkthroughs over and over. I do not own a PSP but I do have a PS3. Which means I have played both collection and III. Very interested by the game, I started to actually like it. I first discovered it when I saw a commercial for God of War II. But that wasnt even the beginning. A year later I saw the commercial for Chains of Olympus. That's when I got curious. When I searched it, I was blown out of my freakin mind. I havent seen anything like it. To take something so classic as greek mythology and actually make it good, that is something hard to do. But to make it their own variation is both clever and ballsy. The name Kratos burned an image in my brain, as a permenant reminder of how awesome it could be. Three months later I saw the trailer for God of War III, on YouTube. But it still counts! Instantly I was hyped. A year later and another trailer proved itself worthy. It was awe inspiring and jaw dropping. I could not belive it could ever happen. Kratos in HD. But since I owned no Sony stations, I couldnt play the game, and as a result, disipointment. 2010 was when I saw the new trailer. Yet again it looked fantastic. But I didnt think it was real, as if it was all cgi. Three months later, God of War III came out and when I saw the walkthrough, I was embarrased. I loved everything about the game. The grafics, the HD, the character and creature design. But the story I despised. I think David Jaffe's ending was far better. I wanted to love the game, but it was just so bland and un interesting. Actually I was watching the walkthroughs of the last games to get the bad taste out of my mouth. May 24th, two months later, I got the PS3. From then on, if I wanted to play a God of War game, I would buy and play it before I check youtube for walkthroughs. But days after, I gave God of War III a chance. Much to my suprise, It was actually good when you play it with the controller, rather then have to watch someone play it. I even used to pick up my WII-motes and played with them infront of the computer. Hearing news for another God of War game come out this year was unbeleivable. But only for the PSP. I think that Santa Monica Studios should make all the God of War games and NOT Ready at Dawn! It is so disapointing to see the game and not play it. What the Hell?

P.S. Words I speak are only for comedic status, not intentional description.

2: The Bringer of Hope

3: The Destroyer of Olympus

9: The Son of Boreas

Retrieved from "https://godofwar.fandom.com/wiki/User:Labours_of_Kratos?oldid=52221"
Community content is available under CC-BY-SA unless otherwise noted.