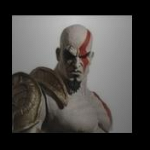 THE HANDS OF DEATH COULD NOT DEFEAT HIM, THE SISTERS OF FATE COULD NOT CONTROL HIM, AND NOW, THE MAN, THE LEGEND, KRATOS, WILL HAVE HIS REVENGE!

I am a HUGE God of War fan. It is a great gaming series, and it also created some of the most brutal deaths in gaming history. Here are my top 7 games in the series:

I have to say, the original God of War has to be my least favorite game in the series. The story was, in a sense, predictable. I knew Kratos wanted revenge, I knew it was because something happened with his family, and I knew that the God of War, Ares, had something to do with it. The voice acting was terrible, too. And the dialogue. And the dullness of Kratos' character. And the--I'm getting ahead of myself, the game was still so much fun.

Yeah, I know what you people are thinking: "WHY THE HELL WOULD YOU CHOOSE BETRAYAL OVER THE ORIGINAL?!?" The story was better, even if there was tons of loose ends, and it was pretty impressive, for a game on the mobile phone.

The story... was less than fun. Why did Persephone reveal her plot to Kratos in the end, knowing full well the lengths he would go to just to protect his daughter? Why wasn't Lysandra in Elysium? Why didn't we have a colossal boss fight between Kratos and Morpheus? What was the deal with that final line? "He'll live. They must..." What does that mean? Still, Chains of Olympus was great... gameplay-wise.

An amazing story, despite a few continuity hiccups. Improved voice acting. Monumentally well-written dialogue. Improved gameplay. These are the good points of GoW II, and why this is the game that got me interested in the series to begin with.

When did Kratos have a brother? Anyway, the story in Ghost of Sparta is very well-written, the characters were given more dimension, the gameplay was still fun, and I love how I can finally wield Spartan weapons now!

The dialogue was... bad. Kind of suckish. The story had little complexity, save for the ending. The characters, though, were much more developed, the graphics were stellar, and, this time, killing enemies was much more fun than ever before. So, why is Ascension number one, again?

I. God of War: Ascension

The answer: Kratos is now more human than ever before. Instead of seeing a rage-monster, and being fed some narration of how tormented his soul is, we see how pained Kratos is inside, and we can feel the weight of his grief and desperation, whereas in the other games, it kind of felt forced and thrown in to make him feel more tragic. We see him establish relationships with others (he even made a friend) rather than just use them as a means to an end. Take all that, and add in improved gameplay, dynamic graphics, stylish monsters and bosses, and fluid, lifelike motions, and, well, my friend, you've got a contender for Game of the Year. Too bad the story was way too short, even by GoW standards.

"The hands of death could not defeat me. The Sisters of Fate could not hold me. And you will not see the end of this day! I will have my revenge!" - Kratos, God of War III

"A Spartan never lets his back hit the ground, right, brother?" - Deimos, God of War: Ghost of Sparta

"I hope for nothing." - Kratos, God of War III trailer

"Your pawn has failed you, Gaia. Perhaps you should have chosen the other one!" - Zeus, God of War III

"The oracle lied." - Thanatos, God of War: Ghost of Sparta

"Zeus! Your son has returned! I bring the destruction of Olympus!" - Kratos, God of War II and God of War III

"I have lived under the shadow of the Gods for long enough! The time of the Gods has come to an end!" - Kratos, God of War II

"People cried out for you. They begged for their God to save them. But you did not come." - Last Spartan, God of War II and God of War III

"I should have expected this from a coward such as yourself. A coward who kills his own kin." - Cronos, God of War III

"Wait, perhaps the sisters sent you to help me! I realize now...!" - Icarus, God of War II

"Don't fail her like you failed your family!" - Zeus, God of War III

"I gave you everything!" - Gaia, God of War III

"The Gods of Olympus have abandoned me. Now there is no hope." - Kratos, God of War

"There will only be Chaos!" - Kratos, God of War III trailer.

"I was never the warrior my father wanted me to be, but all I ask: give me an honorable death." - Orkos, God of War: Ascension

"Break an oath with a God? Of all the minds in question, mine is not the one to worry about." - Kratos, God of War: Ascension

"My death will not free you from this madness!" - Alecto, God of War: Ascension

"'All on Olympus tremble at my name! Zeus is weak, Ares and Athena are dead, and I wield the Blade. Together, we will destroy the petty Gods, and see Olympus crumble before us! Come with me, Gaia! Return to my time! Victory awaits!" - Kratos, God of War II

The pages I created

Retrieved from "https://godofwar.fandom.com/wiki/User:Cronusfire01?oldid=73752"
Community content is available under CC-BY-SA unless otherwise noted.