God of War Wiki
Register
Don't have an account?
Sign In
Advertisement
in: Enemies, Monsters, Undead,
and 9 more
English

Dressed in the armor of ancient Greek warriors, they appear as demonic skeletons with bits of decaying flesh clinging to their bones. A frequently encountered enemy, they sometimes come in clusters and are quite varied. Early on, they wear little armor and wield short swords, but, as the games progress, they begin to appear wielding larger swords and wearing heavier armor and eventually end up wielding massive shields and scythes.

In God of War: Chains of Olympus, Kratos encounters other undead warriors that are counterparts to the Legionnaires: the Shades of Morpheus and the Hoplites, which Kratos battles in the Underworld.

In God of War, the Undead Legionnaires are first met during the Hydra's attack on Kratos' fleet. Later, they make up the majority of Ares' army of the undead, which is assaulting Athens, and are commonly seen as guardians in the Pandora's Temple. There are several sub-types of them, the stronger of which are the Hades Legionnaires, which Kratos fought in the Underworld. There is also a lot of related undead creatures, like Wraiths.

The Hoplites return in God of War: Ghost of Sparta. They are stronger than in Chains of Olympus.

During Kratos' godhood, some of these undead servants are sent by Hades to stop Kratos from reaching the Assassin and uncovering the plot to destroy his reputation with the Olympians. As always, they are no match for the Ghost of Sparta.

They return in God of War II, but they only appear two times: in the Spiked Wall trap before the Garden of the Gods, and near the Phoenix Chamber, presumably protecting the Sisters of Fate. Their role of the most frequent enemy of the game, is now taken by the Fates Sentries.

In God of War III, the Undead Legionnaire is replaced by a very similar enemy called the Olympus Sentry, which makes up the largest part of the gods' army.

Kratos can grab an Undead Legionnaire and then press a certain button to perform one of the following kills:

All four of these kills also apply to other types of Legionnaires and Undead Archers. 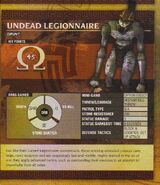