God of War Wiki
Register
Don't have an account?
Sign In
Advertisement
in: Enemies, Monsters, Undead,
and 6 more

Undead Archers are enemies seen throughout the God of War series.

They are seen as common minions of Ares' undead army. They are a common and usually easy foe to defeat, but when encountered in numbers on higher difficulties they can become quite dangerous enemies to face. At close range, they can hit Kratos with their bows.

They are similar to Undead Legionnaires, and are often seen with them, taking up defensive positions.

There are also stronger variants of these archers known as the Cursed Archer and a fiery Underworld version known as the Hades Archer. With each type, they become better armed and armored.

Kratos can also kill them the same ways as the Undead Legionnaires. 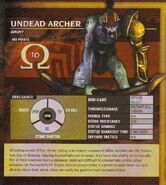