Tisiphone was one of the Erinyes or Furies and the sister of Alecto and Megaera.

Tisiphone is one of the Erinyes or Furies, and the sister of the two Furies Alecto and Megaera. She was the one who punished crimes of murder: parricide, fratricide, and homicide. A myth recounts of how Tisiphone fell in love with Cithaeron, she gets furious because of his despise, she throws a snake for her head causing his death by a snakebite from one of the snakes on her head. Tisiphone is also recognised as the furious and cruel guardian of the gates of Tartarus.

Tisiphone and the rest of the Furies pursue Kratos for breaking his bond with Ares. Upon encountering Orkos in Delphi, Kratos is informed that the Furies were once fair in their judgement and punishment, but became ruthless because of Ares, the God of War, whom convinced the Furies to help him conspire against Olympus. Alecto, the Fury Queen, and Ares conceived a child who they hoped would aid them in their mission to bring down Olympus. However, the child, Orkos, was considered weak by Ares and was thus disowned. To please his mothers, Orkos became the oath-keeper. He turned against his mothers once they blinded his friend, Oracle Aletheia, and unjustly punished Kratos.

Shortly after killing Megaera, Kratos enters a small temple occupied by the King of Sparta, who shows his respect to Kratos and compliments him on his work for Sparta. However, Kratos notices Lysandra's ring on the King's finger, and realised this is but another illusion and attacks the King. The illusion ceases as the King is revealed to be Tisiphone, who promptly flees from Kratos to a separate part of the Prison. Once he's caught up with Tisiphone, she orders her pet to attack Kratos again, but this only allows him to retrieve the Oath Stone of Orkos within the beast. Tisiphone then enters Alecto's Chamber and Kratos pursues her. After confronting Alecto and Tisiphone, Kratos is thrown into battle against the two remaining Furies. Both sisters use their powers to their fullest; Alecto morphs into a giant sea-monster while Tisiphone creates an illusion of being at sea, beside a whirlpool, and uses her pet to attack Kratos constantly.

After defeating Alecto, Kratos kills the Daimon and starts beating Tisiphone to death as she forms several illusions, including the King of Sparta telling him he was not fit to be a Spartan and Kratos himself, telling him that he lost everything because of his own actions. Kratos then begins to choke Tisiphone. However, she formed an illusion to become Lysandra, briefly stopping Kratos. However, Kratos managed to see through the illusion, as well as the illusion of the Village Oracle. She told Kratos that his wife and child were not at the temple by chance and he killed Tisiphone by breaking her neck. 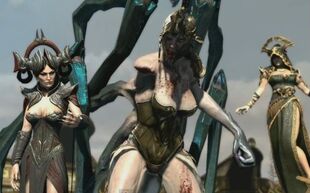 Retrieved from "https://godofwar.fandom.com/wiki/Tisiphone?oldid=79359"
Community content is available under CC-BY-SA unless otherwise noted.