God of War Wiki
Register
Don't have an account?
Sign In
Advertisement
in: Characters, Males, Aesir,
and 6 more
English

God of War (2018)
Thor (Old Norse: Þórr) is the Norse Aesir God of thunder, lightning, storms, and strength. He is the son of Odin and Fjörgyn, husband of Sif, half-brother of Baldur and Týr, and the father of Magni, Modi, and Þrúðr, his daughter.

In Norse mythology, Thor is an Æsir God associated with thunder, lightning, storms, oak trees, strength, the protection of mankind, and also hallowing and fertility. Thor is described as a barrel-chested ugly man, carrying a menagerie of magical weapons, from a pair of magical gauntlets to a girdle of strength. However, his most notable weapon is the hammer Mjölnir, which is powerful enough to level mountains.

Thor was born as the son of the Aesir God Odin and the Jötunn giantess Fjörgyn. He is the half-brother to Týr and Baldur. At some point in his life, he became the husband of Sif and had a daughter with her. Thor also had two sons, Magni and Modi, both of which were conceived with an unknown Jötunn, and had different mothers (Sindri commented this was a "sordid story").

Odin commissioned Brok and Sindri to build a powerful weapon, Mjölnir, for Thor to use to protect Asgard. Both dwarven brothers would come to bitterly regret making the hammer many years later.

At some point, Odin tricked the stone giant Hrungnir to drink an amount full of mead and make him goad in front of the Aesir in the hall of Asgard, all to entertain and laugh at him. When Thor arrived and saw the drunken giant, he threw Mjölnir so hard it smashed his head into pieces, with a piece ended up lodged in Thor‘s head. Hrungnir’s body would end up falling on top of Thor. None of the Aesir in the hall, not even Thor, would able to budge the corpse off him. Thor’s sons, Magni and Modi, who at the time were no bigger than shrubs, would come to their father’s aid, and managed to lift Hrungnir’s body off him while no one was looking, except for Mimir who was there during the event. Magni would get all the praise from Thor for being blonder, while Modi became bitter and resentful towards his brother for not getting any credit for his involvement.

After Odin was forced to flee Jötunheim after the Giants discovered him trying to steal their secret knowledge of the future, he furiously ordered Thor to use Mjölnir to slaughter every giant in Midgard that he could find. By the time of Laufey's death, Thor had already slaughtered most of the Giants in Midgard (with the exception of Jörmungandr) and earned a fearful reputation as the strongest Norse God in all the nine realms.

When the giant Thamur went to Midgard in order to search for his son, Hrimthur, Thor appeared and killed the stonemason by causing him to fall on his own chisel and Thamur's gigantic body crushed the fishing village which worshipped the Vanir God Njörd. Thor would always act like he planned to make the Giant fall onto the village and destroy it, although Mimir states that it was simply just a case of luck.

Following the murder, Odin entered a bet with Hrimthur, a Jötunn disguised as a mortal and the son of Thamur, to improve the walls of Asgard within a near-impossible span of time. Odin lost the bet and sent Thor to kill Hrimthur when he discovered stonemasons true nature as a Jötunn. Unbeknownst to Odin, Hrimthur had sabotaged the walls and entrusted the secret of his deception only to Freya for the preparation for Ragnarök when Surtr arrive to burn as Asgard to ash.

After losing his hammer to Thrym while he was sleeping, Thor snuck into Jötunheim with Freya into the wedding feast between her and Thrym. When Giant King revealed Mjölnir during the ceremony, Thor revealed himself, took back his hammer and began slaughtering every Giant present for the festivities, including Thrym by smashing his skull. That is until Freya cast a spell to return Thor and herself back to Asgard, which caused him to hold some form of disdain against her as he was also ordered by Odin to establish a foothold in the realm.

Thor also still trusted his brother Baldur completely, despite the fact that the God of Light had lost his sanity long ago in the eyes of the other Aesir and was regarded as dangerously unhinged.

Although absent in the main campaign, he is mentioned consistently throughout as a monster who slew every Giant he could find in Midgard to satisfy his blood-lust.

Thor is also mentioned to have fought The World Serpent years ago during his massacre of the Giants. But, instead of emerging victorious, the World Serpent proved to be just as strong as the Thunder God, leading to a stalemate. Thus Thor was forced to return to his father Odin empty-handed. As a result, Thor and The World Serpent have hated each other ever since. It is also said that their rivalry will not end until the coming of Ragnarök.

Kratos and Atreus also meet the spirit of a former disciple of Thor, who desires vengeance on the God for wronging his family. After his father died, the spirit's mother built a statue of Thor to watch over his grave and were surprised when the God himself came to offer condolences. While they were initially thrilled, Thor took advantage of the family's hospitality. The mother had to beg him to leave, but in a drunken rage Thor murdered her. The man lived in grief until it eventually turned to rage and hatred.

Before he can leave Midgard to begin his quest for vengeance, he requests that the statue be destroyed, and any valuables in his father's grave may be looted with his blessing. In their boat, Kratos uses the man's story to remind his son of an important lesson: the lives of men mean nothing to the Gods, recounting Kratos' own experience of being betrayed time and again by the Olympian Gods.

After Modi fled to Asgard upon Kratos killing Magni, Thor was furious to learn of his favored son's death. Believing Modi abandoned Magni, Thor angrily and brutally beats him for his cowardice.

Thor only physically appears in the game's true ending. During a dream about the future, years after the events of the game, Kratos and Atreus were sleeping. Thor arrived and summoned a huge storm outside their house, causing Kratos and Atreus to investigate. When Kratos demands he reveal his identity, Thor silently lifts his cloak revealing Mjölnir as it emits electricity. The dream ends and is relayed by Atreus to his father after he wakens, theorizing Thor will come to avenge the death of his sons and half-brother.

Thor's full appearance is not fully shown, though he is seen possessing blue eyes, red hair, and a thick beard which seems to be braided (as mentioned in The Lost Pages of Norse Myth: Episode 4). He is exceptionally tall and muscular, roughly equal to Kratos in terms of body stature and height. He wears a black hooded cloak fastened together with a yellow leather chord and armor, the latter of which consists of a decoratively embossed dark-colored chestguard and matching vambraces worn over a long-sleeved shirt. He seems to have a cold-blooded and serious expression very similar to Kratos himself in the past. According to Mimir, Thor also has several pieces of the stone giant Hrungnir imbedded in his skull.

Thor is widely feared throughout the Nine Realms for his cruelty, violent temper, brutality, and sadism. He was utterly ruthless, showing no mercy to his enemies, and his bloodlust was noted by Mimir to be the only thing greater than Odin's own paranoia, and many consider him the worst of the Aesir gods. Despite being half-giant himself, Thor took sadistic pleasure in torturing and killing any giant he could find. His reputation was somewhat similar to Ares, who was considered the worst among the Olympian Gods.

What makes him different from Ares, however, is that he seems to possess a sense of honor, as he dislikes cowardice. When Modi fled after Magni, his favorite son, died; Thor was angered greatly and subsequently beat his surviving son for fleeing from Kratos and deemed Modi a coward. He also somewhat cares for his worshipers, as when one of his faithful followers died he made time to visit the family, although even then he still could be enraged easily, especially while drunk, and ended up taking advantage of his higher status.

Thor's overall intelligence could be called into question, as many a time has Thor been made a fool of himself or made stupid, reckless mistakes (quite comparable to his sons, in fact). Brok considered him the big idiot, and Atreus also called him an idiot when hearing about how he got crushed by Hrungnir's body. Most of all, Thor had his legendary hammer stolen by the giant Thrym, when he was carelessly sleeping. However, Thor is clever enough to know his limit and not try to challenge Starkaðr alone, knowing very well that he would die.

In addition, Thor is extremely arrogant, typical for an Aesir, as he would go to great lengths to cement his reputation amongst the Nine Realms and be respected, as well as feared. An example being the destruction of the village when Thor battled Thamur, Thor claimed credit for the giant's death and the village's destruction, despite the fact that Thor was merely lucky in both actions.

Despite his dark side, Thor has proven to deeply care and trust his family. He is known for being very loyal to Odin and was close with Baldur, comforting him in his depression over being unable to feel and trusting him with his life, even despite the latter's insanity a despiting him over his bloodlust. Magni points out that he and Modi have to trust Baldur because their father believes in him, despite Modi proclaiming that their uncle had not been sane for a while. Thor was also known for being furious at Magni's death and after Modi and Baldur died as well, Thor would apparently attack Kratos and Atreus to seek vengeance for their demises.

Being both half-giant and Odin's firstborn son, Thor is the second most powerful of the Aesir (and maybe physically the strongest Aesir), surpassed only by his father. His power is great enough for having slaughtered almost all the Giants living outside of Jötunheim, whilst being recognized and feared by most alongside his brutality. In addition, even with Kratos and Atreus having killed Baldur, Magni, and Modi, Thor appears confident enough in his abilities to personally confront them at their home by himself, and Mimir stated that he does not know whether Kratos can kill Thor.

Kratos encounters Thor outside his home. 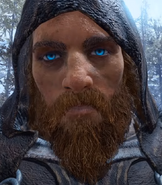