Temples are structures of worship for various Greek deities. Dedicated to many gods, titans, heroes, and kingdoms. Kratos encounters all sorts of temples and thrones to the gods throughout the series. Many of which hold traps, puzzles, and other significances.

Greek temples (Ancient Greek: ὁ ναός, ho naós "dwelling", semantically distinct from Latin templum "temple") were structures built to house deity statues within Greek sanctuaries in Greek paganism. The temples themselves did usually not directly serve a cult purpose, since the sacrifices and rituals dedicated to the respective deity took place outside them. Temples were frequently used to store votive offerings. They are the most important and most widespread building type in Greek architecture.

Temple of the Gods 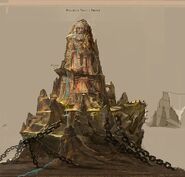 Temple of the Fates

Rotunda of Olympus (Multiplayer)
Add a photo to this gallery

Retrieved from "https://godofwar.fandom.com/wiki/Temples?oldid=97783"
Community content is available under CC-BY-SA unless otherwise noted.