God of War Wiki
Register
Don't have an account?
Sign In
in: Norse Monsters, Norse Mythology, God of War (2018) Enemies,
and 3 more

View source
watch 02:23
Wiki Targeted (Games)
Do you like this video?
Play Sound

Tatzelwurms are snake-like feline enemies that appear in God of War (2018). They usually appear in groups of two or more, often with other enemies.

They attack Kratos either by burrowing and launch out towards him or biting. If they are stunned, Kratos can finish the beasts either by violently slamming them into the ground by their tails or by ripping out their hearts.

In Alpine folklore, the Tatzelwurm or Stollenwurm is a lizard-like creature, often described as having the face of a cat, with a serpent-like body which may be slender or stubby, with four short legs or two forelegs.

The alleged creature is sometimes said to be venomous, or attacks with poisonous breath and to make a high-pitched or hissing sound.

Anecdotes describing encounters with the creature or briefly described lore about them can be found in several areas of Europe, including the Austrian, Bavarian, Italian and Swiss Alps. It has several other regional names, including Bergstutz, Springwurm, Praatzelwurm, and in French, arassas. 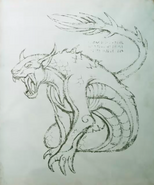