God of War Wiki
Register
Don't have an account?
Sign In
Advertisement
in: Males, Characters, Norse Gods,
and 5 more
English

God of War and Laws

Týr is the Norse God of War, Law, and Honor, a son of Odin, half-brother of Thor, Baldur, Hodr, and Bragi and paternal uncle of Magni and Modi.

He is the Aesir God of War and Laws. However, he was betrayed by his father, Odin when he imprisoned him and attacked the giants.

Týr is a Norse god associated with war and heroic glory in Norse mythology. He is typically described as only having one hand, having lost the other to the wolf Fenrir. Corresponding names in other Germanic languages are Gothic Teiws, Old English Tīw and Old High German Ziu and Cyo, all from Proto-Germanic *Tīwaz. The Latinized name is rendered as Tius or Tio and also formally as Mars Thincsus.

In the late Icelandic Eddas, Týr is portrayed, alternately, as the son of Odin (Prose Edda) or of Hymir (Poetic Edda), while the origins of his name and his possible relationship to Tuisto (the divine ancestor of the Germanic peoples) suggest he was once considered the father of the gods and head of the pantheon, since his name is ultimately cognate to that of Dyeus, the reconstructed chief deity in Indo-European religion.

Týr's most notable tale is how he lost his hand to the Wolf-Giant Fenrir. Before Fenrir was chained and imprisoned, the Gods decided to raise the wolf pup in Asgard. They knew the future of young Fenrir and let him stay as a way to try and control their fate, but no one other than Týr dared to go near the wolf out of terror. As such, Týr was the only one who dared approach the wolf to feed him. But with Fenrir growing so quickly, Odin and the other Gods decided to imprison him to keep Ragnarök from happening.

Fenrir broke every chain the gods used to keep him imprisoned. Until they sought aid from the dwarves who forged the magical Gleipnir; an unbreakable chain made from six mystical materials: the sound of a cat's footfall, the beard of a woman, the roots of a mountain, the sinews of a bear, the breath of a fish and the spittle of a bird. Gleipnir was noted to be as thin and as soft as a silk ribbon.

When the Gods returned Fenrir with the new chain, the wolf grew suspicious due the apparent pointlessness of being bound with something so delicate. So Fenrir decided to test their honour, by having one of the Gods put their hand in his mouth as he was bound as a show of good faith that meant there was no deceit surrounding the silk chain. If they were lying, one of the Gods would lose a hand. Týr silently stepped up and placed his right hand within the wolf's jaws. As Fenrir thrashed and kicked, Gleipnir only grew stronger and tighter. Realising he had been tricked, Fenrir bit off Týr's hand in rage.

In Gylfaginning, he's regarded as the bringer of victory as well as one of the bravest and valiant for his role in the binding of Fenrir and yet also promoter of perjury. The latter made him not considered as a god associated with settlement among the people.

Týr was the son of Odin and Hróðr and was the half-brother of Thor, Baldur, Hodr, and Bragi. Although he was the god of war, Týr fought for peace. He was a frequent traveler of the world, eager to learn about other cultures and gain new perspectives, believing it to be the only way of achieving true peace. Because of his kind demeanor, Týr was often given relics during his travels, keeping them safely tucked away in his own personal vault. Týr was also responsible for leading the construction of the Temple in the Lake of Nine, allowing for faster and more fluent travel between the Nine Realms.

A natural pacifist, Týr sought to broker peace between his people, the Aesir, and their long-standing enemies, the Jötnar, following the tentative truce between the Aesir and the Vanir. Though the Giants were frightened by the Aesir's power, they held enough trust in Týr to allow Odin entry into Jötunheim for negotiations. Unbeknownst to Týr however, Odin secretly intended not to honor any deal made, and instead, used the opportunity to spy and steal the Giants' secret wisdom.

Anticipating Odin's treachery, the Giants expelled him from Jötunheim, cursing him never to return. In anger, Odin turned his wrath on the Giants of Midgard, allowing Thor to massacre them at will. Feeling guilty for his role in the Jötnar's suffering, Týr aided the Guardian of the Jötnar, Faye, in hiding the gate to Jötunheim in the space between realms, preventing Odin from ever having a direct way back to Jötunheim. However, through the use of the Unity Stone, Týr himself was still able to access Jötunheim via the hidden gate.

Eventually, Odin grew to regard Týr as a threat to his power, correctly suspecting him of plotting with the giants. As a result, Odin had Týr imprisoned and spread rumors that he had died. As a result, everyone in the Nine Realms believed Týr to be gone forever.

As Fimbulwinter came to an end, Faye's husband and the Greek God of War Kratos and their son Atreus began a quest to find Týr in order to prevent the prophecy of Ragnarok from coming to pass. Mimir after learning this told them that though he had heard Týr was dead, Odin particularly seemed to be concerned with making sure that he was never found. They eventually discovered his prison and freed him, before asking him to join their fight.

Despite being the Norse God of War, Týr used his powers and abilities to make peace between the races, instead of starting wars unlike his Greek counterpart Ares, and then Kratos. He used his powers not for selfish reasons like his fellow Aesir but for a higher purpose and with wisdom. And this, in a way, made him a war deity in name only. Týr liked to interact with other cultures, while gaining a new perspective, to learn and share knowledge & wisdom with them, unlike Odin, who hoarded knowledge, guarding it jealously. Due to his kindness, Týr accepted items from the places he visited. Týr kept all the gifts in his temple, most likely to remind himself of the wisdom and knowledge he learned & shared. Týr is likely wiser than Athena.

All the realms adored Týr for his peaceful and understanding nature as they worked together in creating the gateway in each realm the Temple of Týr, all thanks to Týr's leadership. Even the Giants, enemies of the Aesir, trusted Týr with some of their deepest secrets and knowledge on how to reach their world. They also gifted him their bejeweled eyes that allowed him entry to all realms. Mimir and other figures besides the Aesir continue to speak highly of Týr.

Overall, Týr is practically nothing like his Aesir kin, who were power-hungry, self-righteous, arrogant and warmongering. Thus, Týr could very well be indeed one of the few gods who were genuinely good, if not great. This makes Týr one of the very few gods that has earned Kratos' respect.

Mimir stated that Týr tried to see the best in people, often leaving him susceptible to the deceitful and heinous nature of others, including his own father, who would later betray him. Týr hoped to bring his father and the Giants together, to forge an everlasting peace but Odin only came so he could enter Jötunheim and learn their secrets of precognition. From that point on, Týr worked tirelessly to ensure that Odin could never enter Jötunheim, likely feeling responsible of the resultant rampage and genocide his brother Thor conducted by his father's orders. The Giants themselves were desperate enough to entrust Týr, an outsider, with the secret paths to their Realm, likely because of how close he was to them. Even Kratos's future wife, Laufey, helped Týr in hiding the Realm Gate to Jötunheim from Odin.

Týr proved to be a very cunning and creative individual, evident in the complex traps found in his temple and by how he managed to hide the Jötunheim gate between the Realms. Even Mimir, who is credited as the smartest man alive, became very impressed by how Týr made sure the Aesir could not reach the giants' realm and of the knowledge he gained.

As a Norse God of War and an Aesir, Týr possessed immense superhuman physical abilities and supernatural powers. It can even be assumed that since Týr is one of Odin's sons, his natural Aesir abilities are far more developed and stronger than other Aesir who are not of Odin's bloodline.

Týr visiting Greece and other Pantheons.

Týr's temple being built by all who adored him.

Another vase found in Týr's vault. 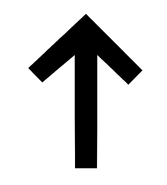 The rune of Tyr. 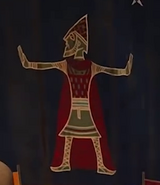