Soul Eaters are a race of corrupted Ancients, one of them appeared as mini-boss in God of War (2018). These monsters feed on the souls of any living being without there life after death.

The Dwarf alchemist Andvari attempted to domesticate the Ancients and use them as beasts of burden, a scheme that for a while seemed to work, but eventually, these modified Ancients began to attack their Dwarven masters and devour their souls.

These "Soul Eaters" immolated the souls of others as a result of lacking a soul of their own, thus they became a danger to every living being it crossed paths with.

However, either despite or because of the dangers these golems represented, some desired possession of the Soul Eaters, since Andvari received both a request from his brother Mótsognir to deliver one to his kingdom, and a request from the primordial Jötunn Surtr to deliver some to his realm of Muspelheim.

Kratos and Atreus only encounter a single one of these Soul Eaters at the Völunder Mines, the last place where Andvari used to reside before his creation turned against him. By defeating the Soul Eater, they recover the sealed soul of Andvari.

Later in their journey, they can come across a more powerful variant known as Soul Devourers.

As corrupted Ancients, Soul Eaters possess similar abilities to the primordial golems, being impervious to all forms of damage and firing energy beams and projectiles by exposing their hearts.

However, Soul Eaters are named such because of their dangerous ability to consume souls. Anyone killed by a Soul Eater will never reach the afterlife, being forever trapped as part of the Soul Eater. 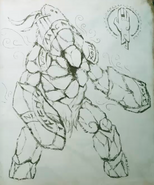 Retrieved from "https://godofwar.fandom.com/wiki/Soul_Eaters?oldid=114050"
Community content is available under CC-BY-SA unless otherwise noted.