God of War Wiki
Register
Don't have an account?
Sign In
Advertisement
in: Characters, Males, Jötnar,
and 3 more

Though Sleipnir doesn't appears, it's pictured in Hrungnir Shrine and with its picture with Odin riding on it. The Sleipnir is also shown on Gróa's Shrine and on Starkaðr's Shrine. The Sleipnir is mentioned and shown on various Jötnar Shrines including the one where Odin killed Ymir 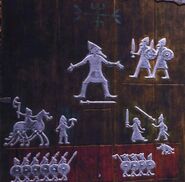 Odin riding on Sleipnir in a battle.
Community content is available under CC-BY-SA unless otherwise noted.
Advertisement