God of War Wiki
Register
Don't have an account?
Sign In
Advertisement
in: Characters, Living Characters, God of War (2018),
and 3 more

Bringers of Day and Night

In Norse Mythology, Sköll and Hati are the sons of Fenrir and grandsons of Loki. Sköll and Hati chase the horse-drawn chariots of Sól and Máni, the personified sun and moon respectively, every day and night until they finally catch them, marking the onset of Ragnarök.

When Sköll and Hati were pups, Odin captured them and kept them in the kennels in Asgard in order to keep their father Hróðvitnir, who was considered one of the Aesir's most dangerous enemies, at bay.

When the sun and moon grew mutinous and stood still, Odin put Sköll and Hati to use. Using ancient magic, Odin cast the wolves to the heavens, and they began chasing the sun and the moon, but they will not do so endlessly. It is foretold that the day Sköll and Hati catch and devour their prey will be the day that marks the beginning of Ragnarök.

Because Odin controls the wolves he believes he also has control over Ragnarök. However, Kratos instigates Fimbulwinter by killing Baldur hundreds of years before the day Ragnarök was said to begin. It is presumed Sköll and Hati will continue their chase as Fimbulwinter rages on.

Mimir: "You're familiar with the tale of Sköll & Hati, bringers of day and night?"

Mimir: "Aye. They were born of the arch-wolf Hróðvitnir, a great nemesis of the Aesir Gods. Odin captured them as pups and kept them in the kennels of Asgard, to hold his foe at bay. But when the sun and moon grew mutinous and stood still, Odin put Sköll and Hati to use. With his ancient magics he cast the wolves to the heavens, and they began their chase. And long shall they chase, but not endlessly, for it is foretold that someday Sköll and Hati will catch and devour their prey. And that day shall be Ragnarök, the twilight of the Gods."

Atreus: "But... Ragnarök is supposed to be Odin's doom, isn't it? Why would he set the wolves loose if it fulfills the prophecy?"

Mimir: "Precisely the question, lad. It's always about control. The wolves determine when Ragnarök begins, and now he controls the wolves. A battle fought on his timetable is a battle he better stands to win." 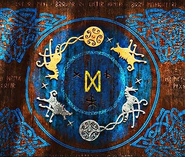