God of War Wiki
Register
Don't have an account?
Sign In
Advertisement
in: Females, Valkyries, Immortals,
and 2 more

View source
watch 02:59
Metroid Dread - The Loop
Do you like this video?
Play Sound

Sigrún, the Valkyrie Queen, is an optional boss in God of War and can be summoned (via a Realm Tear) after defeating the other eight Valkyries and placing their helms on the thrones found at the Council of Valkyries.

Sigrún is immensely powerful, with Mimir saying that she is the strongest of all the Valkyries, with the presumed exception of Freya, the former Valkyrie Queen. Testaments of her surpassing strength was the fact that she was able to overpower and lock away the other Valkyries. She possesses the abilities and movesets of all the other Valkyries (except for the summoning ability). In addition to this, all of her abilities are empowered and do significantly more damage than their counterparts. Defeating her will grant you the trophy "Chooser of the Slain".

The two fall in love, and Sigrún tells Helgi that her father Högni has promised her to Höðbroddr, the son of king Granmarr. Helgi invades Granmar's kingdom and slays anyone opposing their relationship. Only Sigrún's brother, Dagr, is left alive on condition that he swears fealty to Helgi.

Dagr is however obliged by honour to avenge his brothers and after having summoned Odin, the god gives him a spear. In a place called Fjoturlund, Dagr kills Helgi and goes back to his sister to tell her of his deed. Sigrún puts Dagr under a powerful curse after which he is obliged to live on carrion in the woods.

Helgi is put in a barrow, but returns from Valhalla one last time so that the two can spend a night together.

Sigrún died early due to grief, but was reborn again as a Valkyrie. In the next life, she was Kára and Helgi was Helgi Haddingjaskati, whose story is related in Hrómundar saga Gripssonar.

Before becoming the Valkyrie Queen, Sigrún served under the previous queen, Freya, and like her other sisters she revered her. However, after Freya's marriage with Odin ended bitterly, the Allfather removed Freya's wings and banished her to Midgard.

Sigrún was then named the Valkyrie Queen, but without Freya they were without freedom, as Odin saw them as mere servants. Ultimately, Odin cursed Sigrún and her sisters to remain in physical form which would corrupt them and cause them to do terrible harm. To protect her sisters, Sigrún imprisoned each Valkryie but she herself would fall to the curse as her sisters did. Thus without the Valkyries, the dead began to overwhelm the realm of Helheim.

Kratos, Atreus, and Mimir battle each of the Valkyries, piecing together what could have happened to them. After defeating eight of the Valkyries and finding their way to the Throne of Eight, they were able to force Sigrún to appear and face her in battle. After a perilous struggle, Kratos and Atreus defeated Sigrún and freed her spirit. There she reveals Odin's role in the Valkyries' troubles and thanks them for freeing her and her sisters. Now she aims to continue her duty in leading her sisters to bring the worthy dead to Valhalla.

Sigrún holds tremendous levels of superhuman strength and durability and is exceptionally skilled in using her scythe, allowing her to take extreme punishment from Kratos and Atreus for an extended period of time to a much greater degree than the other Valkyries before being defeated, and can go blow-to-blow with, and even pin down Kratos, who had to put in considerable effort to break out.

Having the powers of all the Valkyries, but to a much greater degree, as well as her own unique powers, Sigrún is able to effectively combine and perform them in quick succession, allowing her to effectively keep Kratos and Atreus from predicting her next move. 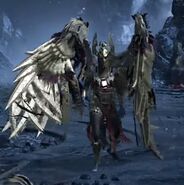 What remain of Sigrún after her death.