The Rotunda of Olympus, the kingdom of the gods, appears in God of War: Ascension's multiplayer and acts as a place for a warrior to choose their alliance to a specific god.

Upon beginning their journey to gain the favor of the gods and become the ultimate champion, a redeemed warrior will awake in Olympus. The circular floor of Olympus has five staircases protruding out of it, four of these staircases lead to a different statue of a god. From left to right the gods are: Ares, Hades, Zeus, and Poseidon. It is unknown what purpose the empty staircase serves.

The warrior gets the choice of which god to align to. To choose the deity, they must go up to one of the statues and accept to pledge their soul in order to gain power. Once the warrior has chosen, he will be given a weapon and made to battle an armored warrior with a silver helmet and blue plume, known as Training Soldier.

To start the battle, the mortal will have to perform specific moves in a sort of tutorial against their immortal enemy. After the tutorial has been completed a battle to the death will commence, in which the warrior will be given the chance to practice the skills that they have learnt. If they win, they are allowed to continue on their quest to gain the favour of the gods by entering a small blue ring that teleports them back to Earth. However, the warrior does not have to descend immediately, they have the choice to continue with advanced training in which they will be taught how to use pick-up weapons, magic, and other such techniques. If the advanced training is completed then a treasure of the gods will become available in a white chest.

The Rotunda of Olympus is also one of the battle maps of the Match of Champions and Trial of the Gods modes of Multiplayer. When players play in the Rotunda in these modes, there isn't a small path leading to the blue ring to Earth or any staircases to the statues of the gods (although the statues themselves remain there). Instead, if a player or enemy is knocked in these empty spaces left, they will fall and die. The Gods will summon either Cyclops Berserker, or Olympus Sentinel.

Trial of the Gods in the Rotunda of Olympus features enemies such as Satyrs, Sirens, Cyclops Berserkers, Hounds (called Wolves in Multiplayer), Amazons and Hooded Gorgons. After killing all of these enemies, the Olympian Sentinel will appear to fight the player(s). By killing him, the match is won. 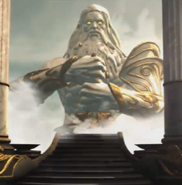 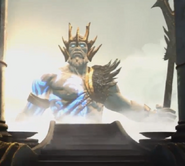 Empty staircase.
Add a photo to this gallery

Retrieved from "https://godofwar.fandom.com/wiki/Rotunda_of_Olympus_(Multiplayer)?oldid=114701"
Community content is available under CC-BY-SA unless otherwise noted.