God of War Wiki
Register
Don't have an account?
Sign In
Advertisement
in: God of War: Ascension, God of War: Ghost of Sparta, Locations,
and 7 more
English

Python was the giant snake-like dragon that was slain by the god Apollo in Delphi.

Python was the earth-dragon of Delphi, created as the first dragon and is the ancestor of all dragons, which existed in the cult center of his parents Gaia and Ouranos. Python is son of Ouranos and Gaia. Hellenes considered the site at Delphi to be the center of the earth, represented by a stone, the omphalos or navel, which Python guarded. Python became the chthonic enemy of the later Olympian deity Apollo, who slew the creature with his bow and remade its former home and the oracle, the most famous in Greece, as his own.

In God of War: Ascension, Kratos travels to the mountains of Delphi in search of the Oracle. He comes upon the giant hollowed out carcass of the mechanical Python, which has been converted into three mechanized means of transportation to the Tower of Delphi. Kratos rides these up and around the mountain, there he encounters manticores. Within the Python's belly, Kratos gains the Lightning of Zeus power. Each of the three replicas of Python are used as keys to unlock the tower and enter the temple. 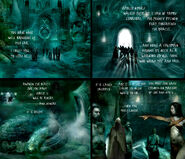 Rise of the Warrior Ch. 11: The Python's Den 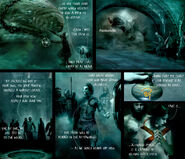 Rise of the Warrior Ch.12: A Brave Sacrifice