God of War Wiki
Register
Don't have an account?
Sign In
Advertisement
in: Characters, Males, Titans,
and 5 more
English

God of War: Chains of Olympus (First mentioned)
God of War II
Prometheus is a Titan. He is known as a great hero and individual of great wisdom and kindness. He stole fire from the Gods and brought it to the mankind. For this he was cruelly and unfairly punished by Zeus. Zeus made Prometheus mortal and enchained him on the rocks near Lair of Typhon. Every day, a big white eagle flew to Prometheus and ate his liver, and during the night his liver regrew, and the next day the eagle returned and continued Prometheus's torture indefinitely. Prometheus was eventually freed by Kratos, when Prometheus asked Kratos to sacrifice him and end his suffering. Prometheus appears in God of War II. 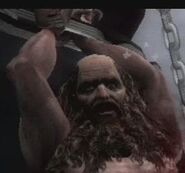