God of War Wiki
Register
Don't have an account?
Sign In
Advertisement
in: Items, God of War: Chains of Olympus, God of War Origins Collection,
and 5 more 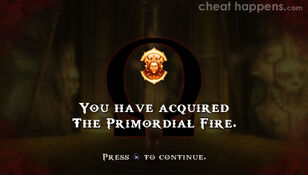 The Primordial Fire is the fire that was stolen by the Titan Prometheus and given to man, an act he was severely punished for. The fires are also known as the Fires of Olympus.

God of War: The Lost World

In the beginning, there was nothingness, Chaos. Out of it came Life, which split its essence evenly among the Primordials, who then proceeded to shape everything in existence. The Primordial Fire was one of these powers born out of the essence of the original Life. Upon its creation, it departed to another world outside the living universe, spawning all fires in existence during the process.

After the birth of the Hecatonchires and their imprisonment by Ouranos, the primordial goddess Gaia, highly distressed by the tyranny of her husband, bestowed the powers of the Primordial Fire upon her son, Hyperion, wisest among the Titans, so he could use them to create a Hyperion Gate connecting the realm of Tartarus with the world of the living and rescue them, thus leading to the birth of the Power of the Sun.

Upon the Titans' defeat, the Power of the Sun passed on to Helios, who used its immense might to banish the 'primordial evils of the darkness' and force them back into the shadows to restore order to the Living World.

In God of War: Chains of Olympus

In God of War: Chains of Olympus, while in the Caves of Olympus, Kratos is tasked by Eos to find the Primordial Fire found deeper within the caves. It is the flame that gives the God Helios his power. When Kratos obtains it, he must then use it with the Sun Shield to destroy three statues that shoot fireballs via gigantic shields.

When Kratos acquires the fire, it powers his Sun Shield and grants him the ability to reflect projectiles back at enemies.