Throughout the God of War games, there have been many incidences that some claim to be either revelations or predictions. Many of these give a heads-up of what is to happen in later games or events. Some of these instances are even biblical.

The murals within the Inner Sanctum of the Temple of the Fates had depictions of the events that occurred in the First and Second Great War.

In the second mural, "A lone soul surveys the wake of carnage that surrounds him". It could possibly mean that a lone man, possibly Kratos, stood amidst the destruction left behind after the Second Great War.

In the third mural, it depicts "Three travellers heading to an unknown destiny". The mural shows three men walking towards a star in the sky, alluding the journey of the Three Wise Men towards the birth of Christ guided by the Star of Bethlehem. This also signifies that after the end of Greek Gods, Christianity has surfaced along other religions of the world. Some fans theorize that Kratos will become the God that is believed and worshipped by monotheistic religions, while others believe Kratos might, in some way, be connected to Christ himself, being the son of a God who saved humanity by giving them hope. Another curious aspect is that in God of War II, a Griffin Rider wields a weapon called Spear of Destiny, the weapon that shares name with the spear that impales Christ's sides during his crucifixion that is used by a Roman soldier, Longinus. 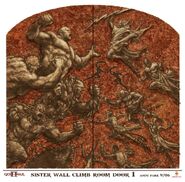 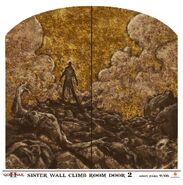 The Last Survivor-Possibly Kratos after The Second Titanomachy 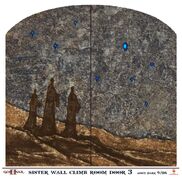 The Three Wise Men
Add a photo to this gallery

Only the first two prophecies of the murals have been fulfilled in God of War III: The war between Gods and Titans and Kratos, the last survivor of the war, who attempted to commit suicide with the blade of Olympus at the end to give hope to mankind. However, an after credit video shows a pool of blood where Kratos laid and a trail of that blood to a cliff, where no body is seen. If he survived or not is unknown at this point.

Interestingly, there is an image where Kratos laid after impaling himself. It closely resembles a Phoenix, which is reborn from its ashes after death. This could be interpreted as Kratos starting a new life after the destruction of all he knows. However, the image could also be an eagle as that is Zeus' symbol.

It is possible the other murals have been fulfilled. As Kratos kills off the Gods of Olympus as well as releasing the evils of Pandora's Box, and finally giving hope to all of mankind, he can be seen as the catalyst to the age of man and Christianity. This could be seen as the prologue to the age of man. As the Gods died, the ocean and sea levels rose, the dead souls wandered the earth aimlessly, the sky blackened as clouds blocked the sun, locust and bacteria carrying flies swarmed all over, and disease spread across the remaining population (among other things), all could be references to the Plagues of Egypt as referred in the Book of Exodus.

It is also worth noting that the book of Genesis describes beings known as "Nephilim", superhuman entities who were the sons of angels and humans and are called the "heroes of old, the men of renown." The book shortly thereafter describes a cataclysmic flood which destroys most of the life, including the Nephilim, on Earth, obliterates all civilizations, and ushers in the age of Judaism as a handful of survivors rebuild the world from scratch; much like the flood brought forth by Kratos' actions in God of War III destroy the Gods, mythical beasts, and all of the perceived world by the end of the game. If the murals in the Hall of the Fates are any indication to the Judeo-Christian nuances in the series, perhaps the Gods of Olympus and supporting mythological figures found throughout the games are to be the Nephilim, the legendary heroes and men of old. Where Kratos and his new-found redemption fit in this theory, it is hard to say; though given that Kratos caused the flood and the other plagues, it could be implied that he may become something akin to the Christian God, leaving Deimos and having escaped from the Underworld. Yet as of Deimos' death in God of War: Ghost of Sparta, this idea is unlikely to happen.

An interesting note: God of War III was released on March 16. 3:16 is a famous verse from the Bible. John 3:16 - "For God so loved the world that he gave his one and only Son, that whoever believes in him shall not perish but have eternal life". Whether this was intentional on the part of the developers is unknown, as it could be referring to the game's scene with Kratos overlooking the world of chaos.

An Omega is seen behind the series' title, Omega is the last letter in the Greek alphabet and could possibly be a prediction of the end of God of War III where Kratos, the former God of War, killed the Olympians and thus ended their rule. So the fact that there is an Omega sign may possibly symbolize the end of Olympians.

Retrieved from "https://godofwar.fandom.com/wiki/Predictions_and_Revelations?oldid=76743"
Community content is available under CC-BY-SA unless otherwise noted.