In Greek Mythology, one of the primary symbols of the Sea God, Poseidon, was the Trident. As his personal weapon, Poseidon could use it to create thunderstorms and strong tidal waves. It was created by the Cyclopes and was given to Poseidon as a gift after his brother, Zeus, freed them from Tartarus.

During the Challenge of Poseidon in God of War, Kratos found Poseidon's Trident within Poseidon's Chamber. With it, Kratos could dive underwater, swim, and breathe infinitely. The Trident was essential to traverse the rest of Pandora's Temple. Despite its name, it wasn't actually Poseidon's own trident, but an artifact that was based on the legendary weapon.

Kratos continued to use Poseidon's Trident through the rest of his adventures (God of War: Ghost of Sparta, God of War II, and God of War III). He eventually combined it with the Soul of Hades that enabled him to swim through the River Styx without harm.

Poseidon's Trident may have finally been destroyed during the last stage of Kratos's battle with Zeus.

The Weapon of Poseidon

In God of War III, Poseidon used a giant, crustacean-themed trident of his own in his battle with Kratos. He used the weapon to control the Hippocampi, which he commanded to attack Gaia and Kratos. Poseidon was also able summon blue lightning with the Trident, which struck Kratos with the electricity while he's on Gaia's head and electrocuted Kratos and Gaia's hand when he's grabbed.

That Trident was destroyed when Kratos forced Poseidon out of his giant watery form.

Poseidon's Trident in God of War. 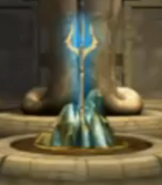 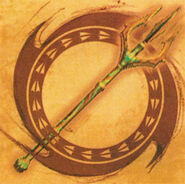