God of War Wiki
Register
Don't have an account?
Sign In
Advertisement
in: Characters, Males, Greek Gods,
and 10 more
English

View source
watch 02:47
Tips and Tricks: How to defeat Poseidon in God of War 3
Do you like this video?
Play Sound

Poseidon is the Olympian God of the seas, rivers, water, storms, tempests, winds, hurricanes, rain, floods, drought, earthquakes and horses. He also is the King of the Oceans and Atlantis. In terms of power, he is surpassed in eminence only by his brother Zeus, with his other brother, Hades, being his equal. He appears as an ally in God of War and a major antagonist in God of War III.

In Roman mythology, he was known as Neptune. Linear B tablets show that Poseidon was venerated at Pylos and Thebes in pre-Olympian Greece, but he was integrated into the Olympian gods as the middle brother of Hades and Zeus and fifth of all of his siblings, generally considered a little less powerful than Zeus. Poseidon and Amphitrite, a nymph and ancient sea-goddess and daughter of Oceanus, had many children including Triton, the messenger of the sea and herald to Amphitrite, Theseus, the cyclops Polyphemus, and Orion the giant master hunter.

For a period of time, the vicious beast known as the Hydra terrorized the Aegean Sea, until Kratos, guided by Athena, was called upon. Arriving upon a mess of shipwrecks, Kratos battled the various heads of the Hydra. During this feat, he was met by Poseidon, who granted Kratos the gift of Poseidon's Rage. With this magical ability, Kratos was able to cast a stream of lightning through his body into his enemies, destroying them or weakening them enough so that he may finish them off. This ability would also be of important use while battling against the Hydra King, the strongest and largest of the Hydra's heads. After destroying the beast, the nightmare the Hydra had caused for many sailors in the Aegean Sea came to an end. Poseidon was also given a section devoted to him in Pandora's Temple. In this section, Kratos obtained Poseidon's Trident, granting him the ability to breathe underwater and dive.

The note reads:
A mere girl, somehow she is the key to the labyrinth. I brought this statue here, but so far have learned nothing. That mortal Daedalus, in his madness, has devised a way to shield secrets from even my far-reaching view. This does not bode well. I fear Zeus is no longer the brother I once knew - Poseidon

The God of the Seas mainly focuses on defense and teamwork rather on attack power. Warriors aligned to Poseidon have the best resistance to damage in the game, however, they're also the weakest damage dealers, which makes Poseidon the polar opposite to Ares in Multiplayer. This makes the alignment mostly undesirable for many players. He also grants his servants powers over ice and the ability to heal their injured allies.

Prior to being infected by the evils of Pandora's Box, Poseidon was apparently a benevolent God, who cared greatly for many mortals and worshippers alike. He would often grant safe passage to many sailors and was protective of his own domain. In spite of his benevolent nature, he much like his brother cheated on Amphitrite by having many flings, Medusa and Princess being notable examples. After being infected probably with "Anger", he notably became much more angrier and weary as he gave multiple death threats to Kratos (who he aided in stopping the Hydra King prior to being infected) when the latter destroyed his city, warned him about challenging the Gods when confronting him and reasonably but angrily tried talking him out of destroying Olympus as it would mean the death of the entire world . Despite this, Poseidon notably showed greater resilience to the evils unlike his brethren, evidenced by his note indicating how he apologized to his Princess for making her the subject of his rage (though he did not free her) and disapproved of Zeus' cruelty towards Pandora as a result of "Fear" and expressed his fear that his brother changed for the worst.

Poseidon was one of the most powerful of the Olympian gods, second only to Zeus, and surpassing Hades. It is notable that Poseidon could have single-handedly bested the Titans in God of War III, having downed two of them and making short work of Gaia, had Kratos not intervened. It should be noted that his power seems to be in direct proportion to the amount of water nearby. During the Second Titanomachy, Poseidon was strong because he had access to the sea, but once Kratos separated him from it, he was more vulnerable. This would explain why Poseidon resorts to using lightning instead of water during the first Titanomachy. 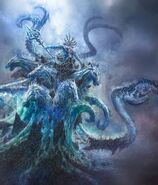 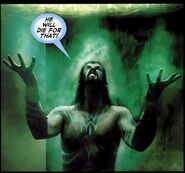 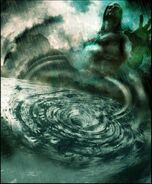 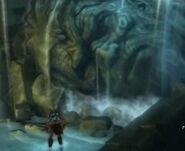 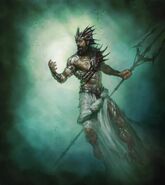