God of War Wiki
Register
Don't have an account?
Sign In
Advertisement
in: Characters, Titans, Allies,
and 6 more

Perses is one of the great Titans that takes part in the Second Titanomachy in God of War III.

They had one child noted in mythology, Hekate, honored by Zeus above all others as the goddess of wilderness, childbirth, witchcraft and magic. She was given shares of the sky, the sea, and the underworld.

At the end of the Titanomachy Zeus wanted Perse's wife Asteria to become one of his lovers. She turned herself into a quail and escaped to the sea. Asteria then changed into the island Delos.

Perses shortly appears at the end of God of War II, after Kratos had rewound his own Thread of Fate to beyond his birth, to visit the first Titanomachy. Meeting Gaia, who was already expecting him, Kratos convinces her and the other Titans to journey back with him to his own time, where Zeus, weakened and wounded after battling Kratos, had fled back to Mount Olympus. Perses, along with his other comrades in battle, is then seen climbing Mount Olympus, starting the Second Titanomachy. If you look closely to the left, you can see Perses climbing beside and behind Gaia.

In God of War III, Perses is sent off Olympus by Helios. He is later seen battling the Sun God on the slopes of Olympia, with Helios holding an advantage over the Titan because of the blinding light he emitted. After having fought his way through the hordes, Kratos used a ballista to damage Helios' Sun Chariot, causing him to fly straight into Perses' hand. Perses then crushed Helios with his Chariot and threw him far into the city, allowing Kratos to find and kill Helios. Kratos is later forced to kill Perses himself after being attacked by the Titan while traveling through an Icarus vent, driving the Blade of Olympus into Perses' eye whilst unleashing a burst of electricity that sent the Titan falling off the mountain.

As the titan of destruction, Perses possess the superhuman strength, stamina, durability and immortality inherent to all others of his species. He also appears to have some affinity with fire and lava, due to his body being made of lava and rock.

Perses about to meet his end.

High quality render of Olympia, depicting Kratos' progress, halted by a Centaur, and the Titan Perses. 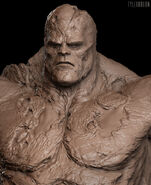