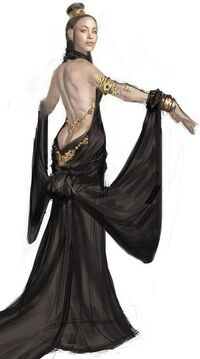 In Greek myth Persephone is the daughter of Demeter. She was stolen by Hades, who then made her his wife, and was then condemned to spend half the year with him as the Queen of the Underworld.

In God of War: Chains of Olympus, Persephone grew bitter from caring over the fallen and allied herself with Morpheus and Atlas to destroy the world, ending her sorrow. She was first confronted by Kratos in the Underworld, while chasing his daughter Calliope. He demanded to see his daughter, but Persephone told him he could only see her again if he was worthy of the Elysium Fields. She tricked him into stripping himself of his weapons, so that he may be with Calliope once more. Persephone then revealed her scheme to Kratos, taunting him over the fact that he could do nothing to stop her. As he tried to attack her, she merely blasted him away.

Kratos gave up the chance to be with his daughter to regain his powers and weapons so that he might be able to stop Persephone. As she traveled to the Pillar of the World, Kratos followed behind her. She sensed him and transformed, gaining heavy armor and a pair of dark wings. She flew off, but Kratos was right behind her, and they battled atop the pillar. Persephone was eventually defeated by Kratos, who was able to kill her. In her final breath, she told Kratos that his suffering would never end.

Retrieved from "https://godofwar.fandom.com/wiki/Persephone?oldid=4734"
Community content is available under CC-BY-SA unless otherwise noted.