God of War Wiki
Register
Don't have an account?
Sign In
Advertisement
in: Characters, Females, Greek Mythology,
and 4 more
English

God of War III
Pandora (Πανδώρα, "All gifts"), was the self-made and adoptive daughter of Hephaestus, and the Tritagonist in God of War III.

Pandora was the first woman to exist. She, and therefore, the female sex, was created as punishment for Prometheus' theft of fire - Hephaestus molded her from the Earth, and each God bestowed seductive gifts on her. She and Epimetheus, were entrusted with Pandora's Box by the Gods, either for safekeeping or a desire to punish mankind. The Box was said to contain all the evils of the world, and despite instructions not to open it, Pandora's curiosity betrayed her. In an attempt to peek inside, all of the evil energies within were released and left behind only Hope, who decided to stay inside the box to remain with humanity. Thus, despite having innocent intentions, Pandora was blamed for all the woes of mankind.

"Box," was in fact a mistranslation from the Greek word pithos, a large jar, into the Latin pyxis, a box.

Created by Hephaestus, Pandora served as a key to the mythological Pandora's Box, which was rumored to bring about the end of the World. After Kratos found Pandora's Box, protected by the Flame of Olympus, Athena appeared before him, informed him of Pandora's role as key, and how to gain access to the Box's contents.

While visiting Hephaestus one more time, the Smith God revealed to Kratos that he had created Pandora as a key to the Box: she was an object neither living nor dead, but he sheltered her from Zeus and instead suggested Cronos as the perfect guardian for the box, as no Mortal could best a Titan. However, after Kratos used Pandora's Box to defeat Ares, Zeus became fearful of the box's power and tortured Hephaestus until he revealed Pandora's location.

Zeus then hid the Box in the Flame of Olympus so that only Pandora could unseal it, and kidnapped Pandora, which prevented her from ever freeing the Box. Zeus then ordered Daedalus to construct a Labyrinth in order to keep Pandora imprisoned, much like he did with the Minotaur.

Pandora was able to communicate with Kratos through bronze statues in her likeness and appeared from a small blue flame in the statue's hands. Pandora appeared several times throughout Kratos' journey, asked him to free her, and hinted at her location.

It was within the Labyrinth that Kratos eventually found Pandora, trapped at the very core of the structure. She helped Kratos escape the Labyrinth by guiding him along its cubes and entering small grates that he could not enter. On the other hand, Kratos had to save Pandora from several traps and protected her from hordes of monsters. Along the way to the Flame, Pandora talked about how much fear consumed the Gods: a fear of her and a fear of the "Marked Warrior."

Pandora expressed how much she hated herself for seeing Hephaestus tortured by Zeus because of her. Kratos simply replied: "Hephaestus did what every father should: protect his child." Pandora continued and said that when the Gods' fear rose, her own fear was replaced by Hope, and even though Kratos believed that hope was for the weak, Pandora insisted that hope was what everyone had when all is lost.  When the two of them saw the hanging corpse of Daedalus, Kratos told her: "This is what Hope delivers, child. You should learn that now."

Eventually, Kratos brought Pandora to the Flame of Olympus and destroyed much of the Chamber of the Flame in the process. Kratos however, could not bring himself to use Pandora to free the Box from the Flames, and tried to stop her by vowing to find another way, even though she was already willing to sacrifice herself.

Zeus appeared shortly afterwards, and a fight between the Ghost of Sparta and the King of Olympus ensued. After he buried Zeus under a pile of rubble, Kratos attempted to stop Pandora from rushing into the Flames by grabbing onto her hand. At that point, Zeus and Pandora both attempted to influence Kratos' decision. Zeus demanded his son not to let her go, whilst Pandora demanded otherwise.

Ultimately, Kratos' hatred towards Zeus proved greater than his desire to safeguard Pandora. Kratos lashed out at Zeus, while Pandora disappeared into the flames. Having sacrificed her life to aid Kratos, Pandora succeeded in extinguishing the flames, and Kratos discovered Pandora's Box empty. Zeus, who witnessed the whole ordeal, stood near Kratos, gloated and laughed over another one of his "failures" before he fled outside.

Despite Pandora's apparent death, her spirit lived on and appeared to Kratos as a ball of flame when he was attacked by Zeus' Spirit. She was able to guide Kratos out of the Chaos and darkness in which Zeus had trapped him. Kratos eventually unlocked the power of Hope, which was sealed within his own soul and finally defeated the King of the Gods.

Pandora was a person in her own right despite being a construct of Hephaestus. She cared deeply for her paternal creator but was consumed with fear when Zeus tortured Hephaestus when the latter protected her. After she was freed by Kratos, Pandora confided in him her story and how her fear was snuffed out by Hope. Pandora was also shown to be incredibly selfless to to the point of sacrificing her own life to the Flame of Olympus against Kratos's plea and was incensed when he called her a "child".

In spite of being a living key, Pandora looked like a skinny young girl in her early to mid teens with pale skin, blue eyes, and brown hair tied in a hair band with a blonde streak in it. Her clothing was a white and blue dress that exposed her hips, lower back, and part of her abdomen.

Contrary to real Mythology, Pandora was crafted and given the gift of life by the Smith God, Hephaestus. He grew fond of her, and considered Pandora his daughter, while Zeus viewed her as an unnatural abomination. Zeus often referred to her as a "thing," or an "object."

Fearing Zeus' wrath for having kept Pandora's existence hidden from him, Hephaestus soon turned to Kratos. A broken man, Hephaestus pleaded Kratos to save Pandora from the God-King's relentless anger. Unable to do so himself after Zeus' initial punishment, the Gods' Smith could not stand to lose his own child. Reluctantly, Kratos accepted, if only to retrieve the means to kill Zeus from the Box. Over time, Kratos too saw Pandora's potential and grew fond of her.

Pandora reminded Kratos very much of his own daughter, Calliope, as when Kratos first heard Pandora's voice, he mistakenly took it for that of his daughter.

At first, Kratos saw her as nothing more than a sheer tool in his plot for revenge, but only after he heard Hera rudely insult Pandora by calling her: "that little whore," Kratos exploded with anger and mercilessly snapped her neck.

Despite him being bent on fulfilling his revenge and even went as far as told her that she wouldn't thank him when their journey came at an end, Kratos could not bear to sacrifice Pandora when the time arrived and told her that he would find another way.

Kratos repeatedly referred to Pandora as "child," which somewhat insinuated that he looked upon her as his actual daughter, or someone close to her. He indeed realized that losing Pandora would mirror losing another loved one, mainly because of Calliope's manifestation in Pandora. When Kratos confronted Zeus a second time, Zeus warned him not to confuse Pandora with his own flesh and blood. After he sneered that it was too late, Zeus implied Kratos' quest for Pandora and his desire for absolution over his murdered family had the same effect on the Gods.

It was most likely that Kratos was reminded of Calliope that brought forth his change of heart, as well as maybe an understanding what Hephaestus had told him about their own relationship, which made him see Pandora as more than just a tool, but, in fact, just as much a human being as himself. It was also evident that Pandora's sacrifice took a heavy burden on Kratos, though perhaps not in vain, as she served as a spiritual guide in his dark mind, where he remembered her statements about hope clear as day.

Pandora being sucked into the Flame of Olympus 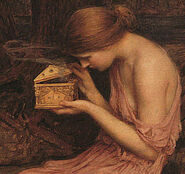 Pandora struggling as the Labyrinth ascends.