Powerful, able to charge, can throw nearby enemies, perform damaging shock-waves, attacks with its arms.

Ogres are a species of burly, powerful, gorilla-looking giants seen in God of War. There are many variations, all of which are very powerful and usually present a significant danger in battle. If they are stunned, Kratos can mount it and use it to attack other enemies in the area. After damaging it enough, Kratos can kill it by cutting open their jaws.

All Ogre appear to be 10 -12 foot tall giants covered in sharp scales and long spikes protruding from their backs. They posses enormously long arms and have a set of razor like teeth in their mouths. In game, as higher level Ogres are encountered, they begin to look more violent and corrupt. Lower level Ogres will have the standard grey-ish skin. Mid-upper level Ogres will have more whitish skin, and have blood red markings and splotches across their skin, and they also posses more sunken in eyes.

Ogres are one of the most powerful standard enemies in God of War. They are capable of performing a number of devastating attacks. All standard Ogres attack by swinging their massive arms or charging at their enemies,as well as smashing the ground to perform shock-wave attacks; which can be done in succession. If smaller enemies are nearby an Ogre may grab them and throw them at Kratos. If an Ogre is stunned it can be grabbed onto and ridden around. Kratos can then use the enraged Ogre to smash into other enemies for a brief amount of time, causing massive damage. 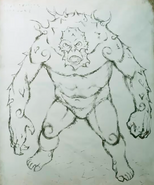 Ogre (Codex)
Add a photo to this gallery
Retrieved from "https://godofwar.fandom.com/wiki/Ogres?oldid=103300"
Community content is available under CC-BY-SA unless otherwise noted.