God of War III (in mural)

In Greek mythology, Nike was a goddess who personified victory, also known as the Winged Goddess of Victory. The Roman equivalent was Victoria. Depending upon the time of various myths, she was described as the daughter of Pallas (Titan) and Styx (Water) and the sister of Cratos (Strength), Bia (Force), and Zelus (Zeal). Nike and her siblings were close companions of Zeus the dominant deity of the Greek pantheon. According to classical (later) myth, Styx brought them to Zeus when the god was assembling allies for the Titan War against the older deities. Nike assumed the role of the divine charioteer, a role in which she often is portrayed in Classical Greek art. Nike flew around battlefields rewarding the victors with glory and fame.

Though Nike herself is absent in the games; statues, paintings, and carvings of her can be sighted.

A statue of Nike can be seen on one of the rooftops of Attica.

While in the Temple of Lahkesis, Kratos reaches a small courtyard with an elevator, on the wall above is a carving of Nike. The elevator leads down to the chains of the Steeds of Time. 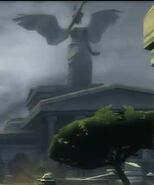 A statue of Nike.

A carving of Nike in the Temple of Lahkesis.
Add a photo to this gallery

Retrieved from "https://godofwar.fandom.com/wiki/Nike?oldid=112789"
Community content is available under CC-BY-SA unless otherwise noted.