Mount Olympus is the largest mountain in the Greek world and home to most of the Olympian Gods, with Zeus as its king who rules over both his fellow gods and mortals alike.

Following Kratos' revenge on Zeus, Olympus itself along with most of the Gods and almost all mortals in Greece are destroyed after the world reverts to Chaos.

It is the highest mountain in Greece and located in Thessaly. It was said to be the home of the Twelve Olympians, the principal Gods in the Greek Pantheon, who lived in crystal mansions.

Greek Mythology also dictated that, when Gaia gave birth to the Titans, they used the highest mountains in Greece as their thrones and Cronos sat on Olympus itself.

After the Great Titanomachy, Olympus' Palace was constructed by the Cyclopes, the one-eyed giants who were freed by Zeus from the depths of Tartarus. In their gratitude, they gave Zeus his trademark Thunderbolts. Hephaestus, the talented God of the Smiths and the Forge, created all of the furnishings and artwork on Olympus and even made some of the chairs and tables that were able to move themselves in and out of the celestial hall.

Mount Olympus appeared in the God of War Series, where a large solid gold palace resided to house all of the various deities. The Portal to Olympus could be seen on Suicide Bluffs.

At the end of God of War II, Kratos was seen climbing Mount Olympus with the Titans, and said that he planned the destruction of Olympus and all of the Olympians who stood in his way in order to get revenge. On Mount Olympus was the city of Olympia, which was home to many Mortals who worshiped the great Olympians. The mountain and its temples were heavily defended by creatures like undead Sentries, Fiends, Archers, Guardians, Chimeras, Centaurs, Cyclopes, Minotaurs, Satyrs, Harpies, Sirens, and Gorgons, who all served Olympus. Many of the rooms contained different kinds of relics and decorations, including statues or shrines that were dedicated to the Gods of Olympus. Aphrodite's and Poseidon's Chambers were located in the upper gardens of the Olympus Gardens. Zeus' Battle Arena was located at the peak of Olympus that contained two rock-sided pieces which resembled the shape of an eagle's wings, which was eventually destroyed during Gaia's demise.

That was also the place where Kratos killed Zeus and released Hope to mankind in the midst of Chaos.

Locations and Objects of Importance:

In God of War III, during the Second Titanomachy, the Titans, who were temporarily in league with Kratos, attempted to ascend the mountain. However, many, if not all, were killed during the climb. Many were repeatedly pulled off and fell to the foot of the mountain, including Perses and Gaia.

The City of Olympia

The Tomb of Ares

The Flames of Olympus 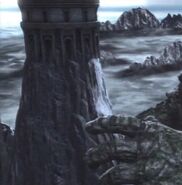 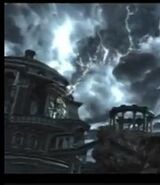 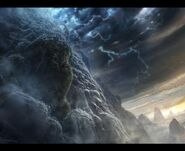 The Chain of Balance