God of War (2018)
Modi was a demigod and son of Thor and the younger half-brother of Magni. He serves as the secondary antagonist in God of War (2018). He and his brother both follow their uncle Baldur in their quest to find and kill Kratos.

Broken both figuratively and literally, Modi returns to Midgard in order to redeem himself. He attempts to confront Kratos and Atreus again while they were inside the mountain, but he is too badly injured to do anything. While Kratos saw no reason to kill him, Atreus begged to differ. Having been told by his father that he was a God, Atreus, in his arrogance wished to kill Modi out of revenge; remarking that as Gods, they could do whatever they wanted. With nothing left to live for, Modi proceeded to make one last particularly vulgar insult towards Faye, which resulted in Atreus stabbing him in the neck before kicking him into a chasm, presumably killing him before Kratos could intervene. 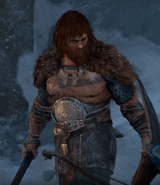 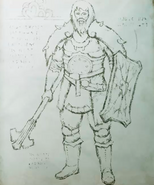 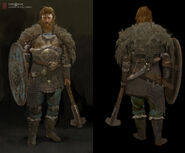