The Mjölnir is a huge war hammer. Unlike most of the mauls and hammers in the Multiplayer, the Mjölnir has a rather simple design. It is decorated with a blueish metal and have Norse symbols on it. 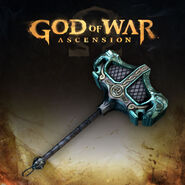 Retrieved from "https://godofwar.fandom.com/wiki/Mj%C3%B6lnir_(Multiplayer)?oldid=107536"
Community content is available under CC-BY-SA unless otherwise noted.