God of War (2018)
Mjölnir is the mighty hammer wielded by Thor, the Aesir God of Thunder. The weapon briefly appears at the secret ending of God of War (2018), when Thor appears in front of Kratos and Atreus' home, at the beginning of Ragnarök.

Mjölnir is the hammer of Thor, the Aesir god associated with thunder. Mjölnir is depicted in Norse mythology as one of the most fearsome and powerful weapons in existence, capable of even leveling mountains. In its account of Norse mythology, the Prose Edda relates how the hammer's characteristically short handle was due to a mistake during its manufacture. The mistake was caused by Loki, under the guise of a fly, biting Brokkr on the eyelid during the hammers creation, which caused the dwarf to briefly stop working the bellows of the forge in order to wipe the blood out of his eye, which caused the hammer to not come out perfect and therefore wouldn't be as good as the other gifts he commissioned for the Aesir from the Sons of Ivaldi. Loki did this in an effort to win the wager he made with Brokkr and Sindri that stated they could take his head if their gifts were deemed better than Sons of Ivaldi's by the other Gods, but if they weren't they would leave with nothing. Along with the hammer, Thor was also given Megingjörð, a power belt that increases his already prodigious strength and Járngreipr, a pair of gauntlets that allows him to handle Mjölnir's power.

The weapon was forged by the Huldra Brothers Brok and Sindri, back when they were relatively unknown blacksmiths, eager to make a name for themselves. Presenting the hammer to Thor, it quickly became the deadliest and favourite weapon of the Aesir, ensuring their dominance and allowing the Thunder God to massacre scores of Jötnar with devastating ease.

After seeing the destruction wrought on giants with the very weapon they created, the two brothers suffered a profound sense of guilt. As a way to try and make up for their mistake, they then forged the Leviathan Axe, a weapon capable of rivaling even Mjölnir, and gave it to the last guardian of the giants left in Midgard; Laufey.

At one point, the Giant Thrym managed to steal the hammer from Thor while he was sleeping. Not one to think with his head, he held it for ransom in exchange for having Freya as his bride. Odin saw this as an opportunity to infiltrate Jötunheim and coerced Freya to conceal Thor using her magic, allowing him to join her at the wedding feast. Once Mjölnir was presented at the party, Thor revealed himself, took it back and wasted no time in smashing Thrym's head in. He proceeded to kill any Giant he could find until Freya cast both herself and Thor back to Asgard, much to the ire of Odin.

The hammer is extremely powerful, capable of killing most beings with one hit and channeling a vast amount of electricity.

Thor brandishing Mjolnir during the secret ending of God of War. 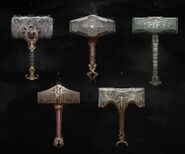