God of War Wiki
Register
Don't have an account?
Sign In
Advertisement
in: Characters, Females, Furies,
and 4 more
English

The Fury of The Flesh

Megaera is one of the three Furies, or Erinyes, in Greek mythology. Megaera was the cause of jealousy and punished people who committed crimes, especially marital infidelity. Like her sisters, she was born from the blood of Ouranos when Cronos castrated him.

Megaera and the rest of the Furies pursue Kratos for breaking his bond with Ares. Upon encountering Orkos in Delphi, Kratos is informed that the Furies were once fair in their judgement and punishment, but became ruthless because of Ares, the God of War whom convinced the Furies to help him conspire against Olympus. Alecto, the Fury Queen, and Ares conceived a child who they hoped would aid them in their mission to bring down Olympus. However, the child, Orkos, was considered weak by Ares and was thus disowned. To please his mothers, Orkos became the oath-keeper. He turned against his mothers once they blinded his friend, Oracle Aletheia, and unjustly punished Kratos.

During Kratos's journey to Delos (shown in the second flashback of the game), he traverses the Statue of Apollo and eventually comes across an illusion of Sparta put together by Megaera and Tisiphone. As Kratos fights illusion Spartans, Megaera also attacks and is able to stand against Kratos quite well, causing powerful shockwaves with her attacks. After a long brutal fight between the two, Megaera is slammed through the wall and her mask gets damaged; she immediately counters by choking Kratos, who saves himself by tearing off Megaera's arm. The illusion then ceases as the injured Megaera and infuriated Tisiphone (and her pet Daimon) attack Kratos head on. During the battle, Megaera is harpooned with the Blades of Chaos and tossed off the Statue of Apollo. Kratos then 'kills' Tisiphone, but it turns out the one he killed was just another illusion. Kratos is then subdued by the third Fury, Alecto, but before she or her sisters can apprehend him, they are stopped by the appearance of Orkos, who saves Kratos by teleporting them to a separate part of the statue away from the Furies.

Later on in the game, after Kratos has reassembled the Statue of Apollo and entered the Lantern, which contains the Eyes of Truth, he encounters the three Furies once more. The sisters also have a subdued Orkos with them. Megaera and Tisiphone hold Orkos in place as Alecto captures Kratos and takes him to be tortured within the prison of Aegeon the Hecatonchires.

In present time (the beginning of the game, the camera is shown from Kratos perspective giving a dramatic effect), a one-armed and angered Megaera wakes a bound and wounded Kratos from his sleep by landing fiercely in front of him. The Fury then slashes at him with her claws whilst a huge metal collar holds him in place. After giving Kratos a thorough and brutal beating, Megaera reveals her face by sliding her cracked mask up and hits Kratos one last time, breaking the bond around his neck in the process. As the dazed Kratos stands up, Megaera brings out her spider-like appendages and attacks, saying "I'm quite skilled in teaching Respect!!" However, Kratos dodges the Fury's first strike, causing her to break one of the chains holding his arms and enabling him to fight back. After a few blows are exchanged, Megaera accidentally destroys the chain holding Kratos's other arm; he promptly slashes at Megaera's abdomen and then charges into her, knocking them both off the ledge that the former was once bound on.

An injured Megaera flees from Kratos, taunting him as she runs on her huge legs. She summons parasites from her chest and they latch on to caged humans in order to transform them into insect-like monsters. The chase continues until they both come to a huge arm of the Hecatonchires. Desperate, Megaera releases another swarm of parasites that burrow into the giant's skin. The arm splits in half to reveal a beastly monster inside. The Fury then leaves the scene as the mutated hand attacks Kratos.

Megaera continues to taunt Kratos as he continues to pursue her throughout the Prison of the Damned. Eventually, she tackles him when he is confronting her sister Tisiphone, proclaiming "He is mine!" The two of them crash through a wall, ending up in front of the head of Aegaeon. When another wave of her minions fails to kill Kratos, Megaera uses her parasites to infect the Hecatonchires's head, forcing Kratos into an epic battle against the mutated giant. After commandeering another infected hand, the Spartan manages to reach Megaera's perch on Aegaeon's eye, impaling her stomach with one of his blades. After a brief struggle, Kratos stabs Megaera in the chest and tosses her off the Hecatonchires. Kratos then dives down after Megaera and drives both blades into her chest just as the pair smash against a lower platform, with the force killing the Fury instantly.

Kratos then recovers The Amulet of Uroborus from Megaera's corpse, allowing him to resume his journey.

Like most immortal beings, Megaera looks upon mortals with contempt, as shown during the chase with Kratos during which she makes belittling comments against him and calls him a "worthless mortal". She is shown to be very arrogant and authoritarian, but also quite cowardly, as she runs from Kratos and does not directly fight him throughout the Prison of the Damned - alternatively, her grievous wounds from her previous fight with Kratos have made her wary of further confrontation, prompting her to rely on the prison's defenses and her parasites to try and kill him.

She is by far the most brutal of the Furies, as she's described in-game as someone that only knows "physical pain" which is proven true as she would torture most if not all of the prisoners, including Kratos, for a long time, although the latter case is special due to having a thirst for revenge for having her arm ripped off during a fight. This desire would grow so strong that she has to be restrained by Alecto from attacking Kratos, and would ultimately prove her undoing; her violent torture of the Spartan ended up breaking his restraints, allowing him to escape the prison and kill Megaera herself.

Before her severed arm, Megaera has two arms with muscular dark claw hands and has a golden Fury helmet with a large crest, and a face plate that she can slide up at will to conceal or reveal her face. She has 4 spider-like appendages that can retract from her back at will. She has a golden fury chest plate that perfectly fits the midsection of her body and outlines her stomach area, protecting her chest and stomach as well as armour on her left shoulder. She has golden knee guards above her sharp feet that come up to her knee-bone. Before fighting Kratos her face was normal with pure skin and completion having no scars or bruises; after the fight with Kratos she sustains notable injuries with her face now having scars and an eye injury, and her right arm is gone. Her helmet is also dented after this, and the left face covering is gone when she is torturing Kratos. Later after torturing Kratos, Kratos cuts her chest, breaking through her armor and cutting her abdomen.

An early concept of Megaera. 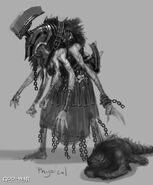 One of the first designs for the Fury. 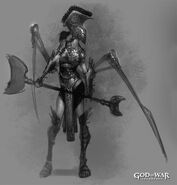 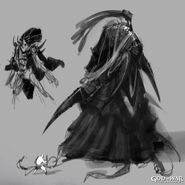 Megaera with both her arms.

Megaera punches Kratos before he could.

Kratos turns the tides on Megaera.

Megaera appears with one arm.

Megaera slides her mask up.