God of War Wiki
Register
Don't have an account?
Sign In
Advertisement
in: Characters, God of War, Monsters,
and 12 more
English

View source
watch 01:05
'God of War' Lore: Medusa
Do you like this video?
Play Sound

Queen of the Gorgons

Medusa was first of the Gorgon sisters in Greek mythology, and one of the many foes encountered by Kratos.

The three Gorgon sisters—Medusa, Stheno, and Euryale—were children of the ancient marine deities Phorcys (or Phorkys) and his sister Ceto (or Keto), chthonic and Phorkys and Ceto are two of children of Pontus and Gaia monsters from an archaic world. The Gorgon sisters lived in a temple on an island at the edge of the world (or Underworld), Medusa was the only one who was slain by the hero Perseus.

Roman poet Ovid depicted Medusa in his poem Metamorphoses as an exceptionally beautiful maiden and a priestess of Athena's Temple. Medusa was greatly admired by many men, both mortal and god. Poseidon, so enamored by Medusa, approached her in the sanctuary of the temple and raped her. Athena would appear before them, catching them in the act. Enraged that her temple had been defiled in such a manner, she cursed Medusa, painfully transforming the once beautiful maiden into a grotesque monster, whose head was christened with venomous serpents, and a face so hideous that one glance would turn anyone who saw her to stone.

While Athena was furious that Poseidon had taken favor of Medusa in her temple, she was not angry with the God of the Ocean himself. As a powerful male god, this would be expected of him. In the eyes of Athena, it was Medusa who deserved to be punished. Ovid's depiction of Medusa reflects a society where women were valued as objects in a male-dominated world, as Perseus describes Medusa's punishment by Athena as just and well-deserved.

During the siege of Athens, she was given the title of Queen of the Gorgons. She and her race are among the armies of Ares, as it is known that Gorgons hated Athena. As Kratos progressed through the ruins of the city, he met Aphrodite, who commanded him to slay Medusa by decapitating her. The hissing Gorgon arose from the shadows and fought with Kratos, who eventually tore her head from her body with his bare hands. Pleased, Aphrodite granted the power of Medusa's Gaze to Kratos, who in turn used it to destroy a group of Minotaurs.

Medusa's existence had come to an end, leaving her sisters, Euryale and Stheno, to lead the race of Gorgons until Euryale's death at the hands of Kratos in God of War II. Since Stheno appears in God of War: Ascension, this would mean that Medusa was the second queen of the Gorgons, and not the first.

Another interesting fact is that Medusa's relation with the hero Perseus in the series is never stated explicitly: it is never told if she was simply called by Ares to attack Athens (without having met Perseus or been killed by him before) or if she was actually killed by Perseus once, like in the original myth, and then resurrected by Ares to help in the siege. The fact that most of Ares' army was composed by undead warriors supports the second hypothesis. Also, many items related to Perseus, including his shield and armor in Multiplayer, have images of Medusa's head on them, indicating he is connected to her in the God of War myth in some way.

Like the lesser Gorgons, Medusa has the power to turn Kratos to stone with her gaze. Even though it is implied otherwise, Medusa's power is that of a regular Gorgon. However, she is slightly less vulnerable and thus more hits from the Blades of Chaos are needed to kill her. Medusa can also teleport by vanishing in a cloud of blood red smoke, as shown when she confronts Kratos. Medusa is also very fast and can attack with her tail. 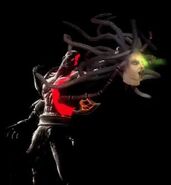 Medusa's Head as it appears in Mortal Kombat (2011), being used by Fear Kratos
Deutsch Español
Community content is available under CC-BY-SA unless otherwise noted.
Advertisement