He and his younger half-brother Modi both follow their uncle Baldur in the quest to find and kill Kratos.

He and his brother tend to bicker a bit but were of course close to a point. Together in battle, the duo were a formidable force. Both brothers also had a reputation of apparently low intelligence, as they were constantly called idiots/fools by a number of characters, such as Baldur, Mimir, Kratos and Sindri, the latter whom referred to them as "Thor's idiot sons". Mimir states that they would do anything their uncle put them up to.

Out of the two of them, Magni was the one who appeared to be the smartest.

Magni also appeared to demonstrate some twisted form of honor as he was willing to give Kratos and Atreus a chance to surrender without a fight, but was perfectly willing to confront them when they refused. He also showed blatant disgust at his brother after Modi asked if he could keep Atreus to himself, suggesting that, there were limits to how far he was willing to go in his depravity.

Another notable factor that motivates Magni, much like his brother although to a lesser degree, is to please his legendary father and prove himself worthy to inherit Mjölnir. Magni was favoured by Thor himself to the point where his father would become furious at Modi for believing that he left him to die.

As a son of Thor, the God of Thunder; Magni is a very powerful demigod, enough to challenge Kratos, although he was eventually overpowered and defeated. 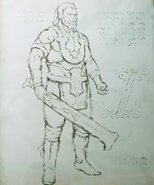 Concept art of Magni's near-finalized design.
Add a photo to this gallery
Retrieved from "https://godofwar.fandom.com/wiki/Magni?oldid=111545"
Community content is available under CC-BY-SA unless otherwise noted.