God of War Wiki
Register
Don't have an account?
Sign In
Advertisement
in: Trolls, Males, Helheim,
and 3 more

View source
watch 02:17
New Pokemon Games - The Loop
Do you like this video?
Play Sound

After a fierce battle, the son of Hel was disarmed and impaled by Kratos' fiery weapons, which were subsequently used to remove the Hel Troll's heart, leaving his now heartless corpse laying at the entrance of the bridge.

The Bridge Keeper is empowered by a totem that contains the very energy of Helheim itself, granting Mátturg Helson a wide variety of abilities, more than any other Troll seen to date.

His most dangerous power is his ability to teleport, allowing for swift and nearly unavoidable attacks delivered with enormous strength. He can also generate roaming spheres of energy that detonate on impact, and can continuously slam his totem in the ground to send large and fast shockwaves of darkness. The Hel Troll has power over the frost element as well, being able to imbue his hands with ice and shoot hail from his fingertips.

The Helson also seems to possess some level of authority in the Realm of the dead, as he can manipulate the structures of Helheim to some extent like telepathically closing the gates of the bridge, and is able to summon Hel-Walkers to aid him in battle. 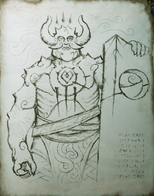