The Light Elves, also known as the Ljósálfar, are one of the two sub-races of Elves that inhabit Alfheim, luminous beings that claim to be the rightful owners of The Light. They first appeared in God of War (2018).

It's unknown which race of Elves came first, and its such lack of knowledge what sparked the conflict between the Light Elves and their dark counterparts for the dominion of the Light of Alfheim.

A leader of the Vanir Gods, Freyr, is noted to have a long history with the Elves, and because he took their side in the long-raging war, the Vanir was appointed as the absolute leader of the Light Elves.

Despite the eternal conflict in their home realm, the Light Elves seem to have had some notable presence in Midgard. A gateway of their design was guarding the entrance to the River Pass which leads to the Lake of Nine where Týr's Temple rests.

Light Elves were also among the races that assisted in the construction of Týr's Temple, presumably being the ones who designed the solid light bridges and the ones who granted the Light of Alfheim that powers the Realm Travel Bridge.

They also had a now abandoned outpost near the aftermentioned temple which was submerged by the World Serpent over a hundred years ago.

Freyr mysteriously disappeared, however, and without his aid, the Light Elves were on the losing side of the war for The Light. Many were forced to retreat and seal themselves in Freyr's Temple, expecting that their missing lord would come to their rescue.

By the time Kratos and Atreus arrived at Alfheim, several of their corpses were scattered throughout the realm as the war continued. The father and son bore witness as the Dark Elves murdered many Light Elves without provocation.

By the time duo released the Light of Alfheim and the Light Elves alongside it, the first order of action of the Elves was to look out for their missing Vanir Lord.

The Light Elves have yet to be shown engaging in any type of combat, but even though they don't seem to be capable fighters, they are capable builders since they found a way to harness the mystical light of their home realm and can use it to create solid structures.

Despite their incredible technologies, the Light Elves appear to be a largely docile group who have demonstrated no aggressive tendencies or internal strife.

It is still unknown what kinds of other magical abilities the light elves possess so far they only show the ability to levitate themselves with no mere effort. 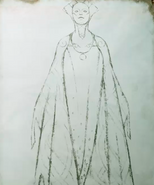 Concept Art of the Light Elves 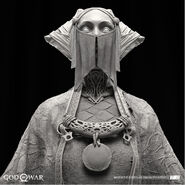