That Throne Room could be seen at the end of God of War as Ares' old chamber. Within it were the Statue of Ares, the Hydra's head above the throne, and the Statue of Pandora's Guardian. By destroying the two statues a Secret Message could be unlocked, which displayed a phone number to call. The statues, along with the Hydra skin behind the throne, were most likely a reminder of the most challenging enemies that Kratos faced to become the new God of War.

In the Secret Message, it was noted that a room that contained Ares' soul was held in the Throne Room that was invisible to all but Kratos.

In Ghost of Sparta, Kratos' Throne Room was redesigned, and the Statues of Ares, Pandora's Guardian, and the Hydra were no longer present.

In God of War II, Kratos' Throne Room was again redesigned, but fit Kratos' personality. It was also much larger and there was a place where Kratos kept much of his weapons and anything else that he had collected from the previous game as seen in the Treasures Option of the aforementioned game.

Kratos' Throne was located on Olympus, and served as his vantage point over the world.

As the very throne that Kratos sat upon in his throne room during his reign as God of War, it most likely previously belonged to Ares, before he was killed by Kratos.

The throne was flanked by a statue of Ares and Pandora's Guardian respectively on either side, and had the Hydra Skin adorned behind it. Kratos could be seen sitting on it as he watched over the Siege of Rhodes, with concubines by his side. At that point, the throne was also decorated with the skulls of fallen foes. He also changed its arm rests to demonic faces with curling horns. 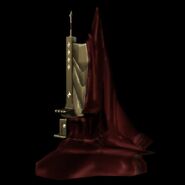 3D-model: The Throne (GoW)
Add a photo to this gallery

Retrieved from "https://godofwar.fandom.com/wiki/Kratos%27_Throne_Room?oldid=108082"
Community content is available under CC-BY-SA unless otherwise noted.