God of War Wiki
Register
Don't have an account?
Sign In
Advertisement
in: Norse Mythology, Characters, God of War (2018) Characters,
and 8 more
English

View source
watch 01:59
'God of War' Lore: Jörmungandr
Do you like this video?
Play Sound

This article contains lore based on real-life sources from Norse mythology as introduced from the God of War Norse era.

Jörmungandr, also known as the World Serpent, is a mythical Jötunn serpent destined to fight Thor come Ragnarök. He becomes an ally of Kratos and Atreus after the pair awaken him from deep slumber within the Lake of Nine.

In Norse mythology, Jörmungandr (Old Norse: Jǫrmungandr, meaning "huge monster"), also known as the World Serpent (Old Norse: Miðgarðsormr), is a sea serpent, the middle child of the giantess Angrboða and Loki. According to the Prose Edda, Odin took Loki's three children by Angrboða—the wolf Fenrir, Hel, and Jörmungandr—and tossed Jörmungandr into the great ocean that encircles Midgard. The serpent grew so large that it was able to surround the earth and grasp its own tail. As a result, it received the name of the Midgard Serpent or World Serpent. When it releases its tail, Ragnarök will begin.

Jörmungandr's arch-enemy is the thunder-god, Thor, with the two being prophesied to kill each other come Ragnarök. Jormungandr will be slain by Thor, who will then take nine steps away before succumbing to the serpent's Eitr poison that it had been spewing in the air during the battle.

According to Freya, the Serpent mysteriously appeared one day in the Lake of Nine. At one point, he had a battle with Thor that could be felt across all the Nine Realms, ending in a stalemate. He has remained in the lake ever since, growing so large he's able to encircle all of Midgard. When the Jötnar were hunted down by Thor and the other Aesir, the remaining Jötnar fled to their homeworld, making Jörmungandr and "the Guardian" the last Giants in Midgard. He passes the time by sleeping and protecting Tyr's Temple. A nearby horn can be used to summon him.

Jörmungandr was seen most partly trapped in frozen ice as revealed from the game's cover art and showcase trailer. 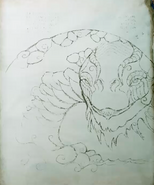 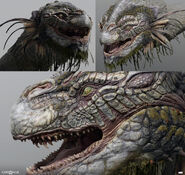 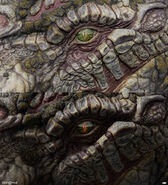