Time ago, Járn Fótr was living alongside the Giants in the Heart of the Mountain, the highest mountain in Midgard, but one day they had a falling out and he was cast out. After all the Giants left, the Frost Troll moved back into the mountain and remains there since.

After Kratos and Atreus finally reached the Heart of the Mountain and were making their way to the top, they encountered the Frost Troll and fought him. The duo proved too much for him and was eventually defeated.

Besides the power of ice, that is granted by his totem, Járn Fótr possesses a large amount of strength, being capable of producing large freezing shockwaves by slamming his totem with great force.

By slamming his empowered foot or totem tip to the ground, he can send straight waves of ice shards towards his opponent, greatly freezing and slowing his enemies upon impact. 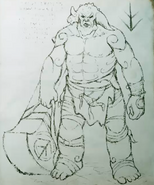 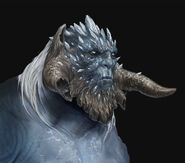 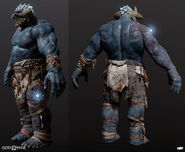 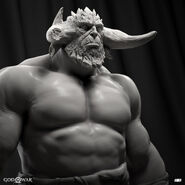 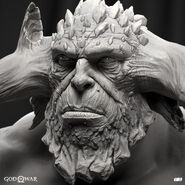 Retrieved from "https://godofwar.fandom.com/wiki/J%C3%A1rn_F%C3%B3tr?oldid=108017"
Community content is available under CC-BY-SA unless otherwise noted.