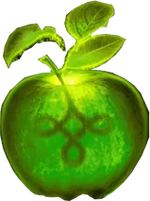 Idunn Apples are items found in God of War. These mythical apples are cherished food by the gods and provide health-boosting benefits. After collecting three apples, the size of Kratos' health bar will increase. Indunn Apples are commonly found in Nornir Chests. A total of nine apples can be found in the game.

1. Shortly after beginning the game, travel through the Wild Woods until you find a circle in the ground with paths leading in all directions. Continue straight to the temple area with three rune pots to destroy and reveal a chest with an Idunn Apple.

2. In the Wild Woods, shortly after fighting the first Revenant, look for a puzzle that lowers two sides of a bridge. There will be a group of rune pots to smash to reveal an Idunn apple.

3. In Midgard, towards the end of the River Pass, there is an area where you first encounter a fire troll. Atreus will go slightly nuts after this encounter. You’ll find another Idunn Apple chest here. There will be rune pots on timers — sprinting around the corner is enough to get all three in time.

4. In Midgard, Near one of the first lookout towers you’ll come across, you’ll find another chest with an Idunn Apple inside. You have to throw the Leviathan Axe at a nearby switch that lowers the spikes on the timed pots. Afterward, hit the timed pots before the spikes go back up. The spikes add additional time pressure, but since you need to hit the runes within a time window anyway, it doesn’t change much.

5. In Midgard, in The Mountain, there will be another Idunn Apple chest in the spot where you find the first Heavy Viken. At this point, you’ll be on the “Inside the Mountain” quest. There’s one runepot in a room a few meters back (you have to throw the shatter crystal at the wall and then use a shock arrow to open it), one rune pot in a rock wall up the ramp, and then after raising the ramp back up there’ll be a pot up top.

6. In Alfheim, when you lower the platform in the middle of the lake to go underneath, you’ll make your way towards the temple of light. Shortly after going underneath the lake, you’ll come across a rune chest. This one is all about the elevator, controlled by the nearby switch. Notice that it has different levels, according to how far you pull it. Two pots can be seen when you freeze the elevator partway down. The last is found in the alcove behind the switch after the elevator is let back up.

7. In Tyr’s Vault, after you start going into the side passages with all the traps. The pots will be quite close, not as far as the next room. One is very close to the chest. One is on the way to the next room, the pot sits in one of the traps coming from the ceiling.

8. In the Forgotten Caverns, as you’re exploring around the Lake of the Nine, there’s another Idunn Apple to be found. Just after you kill/free the first Hel-Walkers. All three rune pots are on a pole that spins around as you hit them. They’re on a timer, so it’ll take a few skill shots to hit them when they’re spinning.

9. In the Light Elf Outpost, another area as you explore the lake. Pots are hidden around the walls, one is halfway up the tower on the outside.

Retrieved from "https://godofwar.fandom.com/wiki/Idunn_Apple?oldid=113428"
Community content is available under CC-BY-SA unless otherwise noted.