Hræzlyr is a Dragon that lives in the Heart of the Mountain, the highest peak in Midgard and a former Jötnar residence.

When Kratos and his son Atreus were travelling through the mountain's interior to reach the summit, Hræzlyr attacked them on their way up. After a brief fight, the Dragon retreated towards the exterior. There, it found the Dwarf Sindri and attacked the smith, but Atreus intervened and Kratos engaged in combat against the Dragon.

Their battle continued until Hræzlyr spotted and attempted to kill Atreus and Sindri, but Kratos used a nearby crane to restrain the Dragon and force its neck into a large spike of crystallized World Tree sap which exploded, destroying a large portion of the Dragon's neck and killing the Dragon.

After its death, one of Hræzlyr's teeth was used to imbue Atreus' bow with the Dragon's electrical power.

As a Dragon, Hræzlyr possesses a large amount of strength, durability and stamina proportional to its large size. It has thick and tough scales covering its body, alongside large claws and teeth.

Hræzlyr has the ability to spew lightning from its mouth, able to shoot it towards to the sky to make lightning rain around it.

Dragons are also able to see Dwarves as they walk between realms, thus Hræzlyr was able to spot Sindri despite his attempts to escape from its sight. 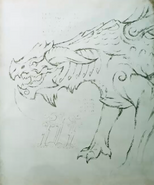 Retrieved from "https://godofwar.fandom.com/wiki/Hr%C3%A6zlyr?oldid=110030"
Community content is available under CC-BY-SA unless otherwise noted.