God of War Wiki
Register
Don't have an account?
Sign In
Advertisement
in: Characters, Males, Greek Gods,
and 8 more
English

View source
watch 01:52
God of War Lore: Hermes, Messenger of the Gods
Do you like this video?
Play Sound

Messenger of the Gods

Hermes is the Olympian God of Travelers, Messengers, Thieves, Commerce, Sports, Athletics, and Speed. He is the son of the King of Olympus Zeus and the Pleiades Maia. He is also the father of Ceryx, the messenger of Mt. Olympus.

In Greek mythology, Hermes is the messenger of the gods and additionally, a guide to the Underworld. As an Olympian god, his sphere of influence was vast; he was the patron of boundaries (and the travelers who cross them), shepherds and cowherds, thieves and liars (and their cunning), orators and wit, literature and poets, athletics and sports, weights and measures, invention, general commerce, profit and good luck. He also acted as the messenger of Hades, guiding departed souls to their final resting place and carrying messages between the Underworld and Olympus. Another of his duties was to take Dreams from the God Morpheus and deliver them to the mortals.

His symbols include the tortoise, the rooster, the winged hat, the caduceus and his winged sandals. He was the son of Zeus and the Pleiades Maia, a daughter of the mighty Titan Atlas. His Roman counterpart was Mercury.

Hermes was born sometime after the first Titan War to Zeus and a goddess named Maia. He matured rapidly and within a few minutes of his birth stole the cattle of Apollo and invented the lyre. He even thought of a clever way to cover up his crime: tying bundles of grass to the cows' feet and leading them backward out of the pasture to make it look like something had been led into the pasture, but not away from it.

Despite this, Apollo found out and went to Zeus for justice. When brought before his father, Hermes attempted to charm Zeus into letting him go by telling him he was just an innocent new born baby. Undeceived, but amused by the child's boldness, Zeus instead forced him to compensate Apollo, which Hermes did by presenting him with the lyre

During the Great War, Hermes is one of the gods who fought the Titans and is seen dodging a boulder thrown at him by one of them. He bore witness to his father Zeus using Blade of Olympus to banish the Titans to Tartarus for all eternity.

Hermes, much like his brethren, was briefly seen competing in the wager of the gods, a contest in which each god chose one mortal to represent themselves in a search for Ambrosia. He was later seen with Poseidon, watching as Kratos, Ares' champion, slaughtered many enemies in his path. His confidence in his own champion, Danaus, proved infallible, as he continually taunted his fellow gods about his champion being the one to steal the Ambrosia. Unfortunately for Hermes, Danaus later met his end at the hands of Hades' champion, Alrik.

Hermes' son Ceryx faced Kratos in battle, and was killed. Hermes himself seemingly did not appear, although one theory about the identity of assassin who killed Argos, claims that he was Hermes himself in disguise, since the Greek myths detailed it was he who slew Argos in the name of Zeus. If this theory is correct, it means nearly all the gods of Olympus plotted against Kratos.

Hermes briefly appears at the end of God of War II, where he is seen talking to the other Gods.

Hermes has a major presence and is one of the main characters in the Official Novelization for God of War II, where he is tricked into having seen Kratos while the latter was visiting Typhon's Lair, and due to Zeus, who had been consumed by fear,'s disbelief at Kratos being even possibly alive, Hermes ends up being expelled from Olympus and exiled, and replaced with the Goddess Iris, who tries to keep herself in the position and on Zeus' good graces by manipulating other Gods as well as Zeus himself in order to prevent Hermes from reattaining his position.

Hermes constantly flies around Greece looking for news that could disprove Iris and restitute him to his position as the Messenger, something that both annoys and pities his sister, Athena. Hermes eventually visits the Sisters of Fate on their palace and manages to obtain crucial information for his return to Olympus, as well as giving the Sisters more reasons to be wary of Kratos.

Near the climax of the novels, Hermes skillfully manages to put Iris in a bad light once he re-enters Olympus, and reveals her lies, placing himself back as the Messenger of the Gods, as well as forcing Poseidon, who had sent the Kraken to kill Kratos, to ultimately stop lying to Zeus, thus redeeming himself just before the beginning of the Second Titanomachy.

Kratos: "To catch a fly from the ass of Zeus is not worth my time, Hermes."
Hermes: "A coward's words, Kratos. You don't try to catch me, because you know you can't!"
―Hermes and Kratos conversing.

Hermes was one of the Gods who battled Kratos and the Titans when they were ascending Mount Olympus. Hermes had leapt down from the balcony and ran straight down the mountain itself. He was not seen since.

During his first encounter with the Labyrinth, Kratos eventually ran into Hermes directly (who just happened to be standing on a part of the Labyrinth at the time; possibly waiting for Kratos), who taunted him about his quest for vengeance and boasted his own speed. After briefly trading insults with Kratos, Hermes ran up the Chain of Balance linking the Underworld and Olympus, with Kratos in pursuit.

Reappearing in the Chamber of the Flame, Hermes again taunted Kratos about his lack of speed. He then led Kratos around the outside of the Olympian Citadel on a perilous chase, with Kratos dodging incoming projectiles. Eventually, Kratos managed to finally corner Hermes by launching a boulder from a catapult; chaining himself to the boulder with his blades. The boulder smashed into an Athena statue, which Hermes had previously perched himself on, and caused the statue to come crumbling down on a nearby building with the two clinging to it.

Unfortunately for Hermes though, the wounds that he had suffered from the crash had left him critically injured and exhausted. Now unable to escape his enemy, Hermes ultimately decided and attempted to defeat Kratos in combat, using his formidable speed and agility to his advantage however, he would be forced to continually stop fighting to catch his breath. Upon his defeat, Hermes mocked Kratos one final time, stating in the end he would betray only himself. Kratos then overpowered him and severed his half-brother's legs in order to claim his winged boots. With his ultimate death, Hermes' corpse dissolved into a swarm of disease-carrying flies that flew across Olympus; covering the land with pestilence and causing the deaths of several of Olympus' servants in the process.

Hermes is shown as being playful and childish. He is greatly arrogant and boastful of his own speed, thinking that Kratos has no chance of catching or defeating him. He acts quite laid-back most of the time, frequently flipping his coin when idle. He is also fairly talkative, taunting Kratos about his tendency to kill family members, his quest for vengeance, and his inability to match Hermes' speed. However, it appears that this light-hearted demeanor masks an intense hatred, which occasionally becomes evident in his dialogue with the Spartan and especially manifests itself when he is forced to confront Kratos in battle. It is possible this is due to the fact that Kratos has killed his son Ceryx. Like most of the gods defeated in the game, he remains defiant to the end, laughing at Kratos' "own sense of honor" and insisting that the Ghost of Sparta will only betray himself in the end.

For all of his unique powers and abilities, Hermes is rather vulnerable. In fact, for all of his boasting, he is actually one of the few gods that Kratos defeats rather easily and without much effort. Hermes mainly relied on his speed and agility in combat, knowing full well that he could never hope to win against Kratos in a straight fight. Likewise, Kratos appears to view Hermes as more of a pest than a serious threat, only engaging in battle with him after incessant taunting and provocation. Overall, Hermes, despite his limitations, still proved to be an impressive and skillful individual. 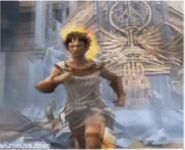 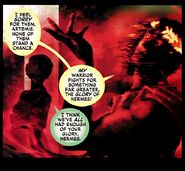 The chase is on

Guest appearance in Destiny of Spirits