After traveling through the ruined city, Kratos discovers Helios once again; severely injured from the crash and unable to lift himself off the ground. A battalion of Olympian soldiers desperately attempted to protect their Sun God, forming a circular phalanx around him. Being unable to shatter their Onyx shields with his weapons, Kratos controlled a Cyclops to break through the ranks, crushing the phalanx, after which he killed the Cyclops by ruthlessly tearing its eye out of its socket.

Helios, pleading for his life, reminded Kratos of the debt he owed the mortal for saving him from Atlas years ago (in Chains of Olympus), and promised to repay Kratos if his life was to be spared as his life was spared from Atlas by Kratos. Kratos immediately demanded the location of The Flame of Olympus. Helios stated he would never reach it or kill Zeus and that he would forfeit his life trying; to which Kratos replied that his life is not the one Helios should worry about. Helios subsequently unleashed the power of the sun, in an attempt to blind Kratos. Kratos however, was able to block the light with his hands and slowly advance toward him and smash Helios' head repeatedly under his boot. Helios then lies to Kratos by saying that Kratos would have to embrace the Flames of Olympus to defeat Zeus, only to have Kratos angrily reveal his deception and that Hephaestus, the God of Blacksmiths, had already told him about the Flame and that it is deadly to both Gods and Mortals. Helios expressed shock at Kratos trusting the words of Hephaestus, labeling the Smith God as an exiled freak who had fallen from the graces of Olympus. Kratos then declared that was exactly why he believed Hephaestus in the first place.

Helios was very proud of his status as "god of the sun", as he was the one keeping external threats, such as Morpheus, away from Olympus. He also shows an honored side, as he wanted to compesate Kratos for saving him from Atlas, can be assumed that Helios always honored his debts. However, after being consumed by the evils of the Pandora's box, Helios became arrogant and manipulative, as when he tried to manipulate Kratos into touching the flame of olympus, and called Hephaestus a "freak" who was cast aside. 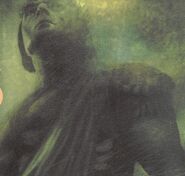 Retrieved from "https://godofwar.fandom.com/wiki/Helios?oldid=101854"
Community content is available under CC-BY-SA unless otherwise noted.