God of War Wiki
Register
Don't have an account?
Sign In
Advertisement
in: God of War, God of War II, Enemies,
and 7 more

In God of War, Kratos encounters these deadly warriors in packs as he traverses the Path of Hades to escape the Underworld.

In God of War II, he battles three of these fiends as he climbs Atlas, and they also appear as he makes his way through the Phoenix Chamber. 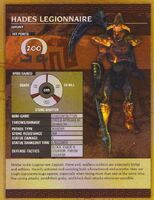