God of the Underworld
Lord of the Dead

Hades was the Olympian God of the Underworld. He is surpassed in eminence only by his brothers, Zeus and Poseidon although it is possible that Hades is considered equal to Poseidon. He is the oldest son of the Titans Cronos and Rhea and husband of Persephone. He was also a minor supporting character in God of War and a major antagonist in God of War III where he was eventually confronted by his nephew, who after a fierce duel, tore off the god's helmet before killing him by absorbing his soul with his own weapons.

Hades was the ancient Greek god of the Underworld and the brother of Zeus, but his name was shared with the abode of the dead. In Greek Mythology, Hades was the first son and fourth child of Cronos and Rhea. According to myth, he along with his younger brothers Zeus and Poseidon defeated the Titans in battle and took over rulership of the cosmos; ruling the Underworld, Sky, and Sea, respectively; the solid earth, the long province of Gaia, was available to all three concurrently.

He was also called "Plouton" (Greek: meaning "Rich One"), a name which the Romans Latinized as Pluto. The Romans would associate Hades/Pluto with their own chthonic gods, Dis Pater and Orcus. The corresponding Etruscan god was Aita and the corresponding Canaanite god was Mot. Symbols associated with him are the Helm of Darkness and the three-headed dog, Cerberus.

Hades appears in cutscenes in God of War II, during the Great War, when the Gods defeated the Titans. He is seen fighting his father Cronos trying to take Cronos's soul until Atlas comes and uses a ground attack on Hades to save Cronos. This causes Hades to turn his attention to Atlas and with his brother Poseidon coming to help him Hades is able to take Atlas's soul placing it within him thus defeating the Titan leader. After the Titanomachy he becomes a prominent figure among the Gods as there is a statue of him in the Garden of the Gods along with Athena, Ares, Zeus, Helios, and Poseidon. At the end of the game he is seen with Poseidon, Helios and Hermes standing in front of Zeus, before the second Great War (when Kratos uses the Loom of Fate to rescue the Titans before they were defeated and imprisoned in the first Great War) begins.

In the comics, Hades is seen in flashbacks competing in the wager of the Gods, a contest in which Gods choose various mortals as their champions, with the goal being the capture of the healing elixir known as Ambrosia. Hades chose Alrik, a warrior who sought to capture the Ambrosia in order to save his ill father, as his champion.

After which, in fear that Kratos may best his champion, Hades sent a torrent of great fires from the sky onto Kratos' army. He was still able to kill Kratos. After Alrik was defeated by Kratos and torn apart by Rocs, Hades revived him and sent him to destroy the Spartan who defied him. After being saved from death, Alrik then discovered that his beloved father had died, and so, the new Barbarian King vowed to exact vengeance on Kratos.

In God of War: Ascension, Ares, the God of War, sent The Furies to capture Kratos and imprison him in a Titan-sized prison for the living damned, where he is tortured for months on end, driven insane, and constantly haunted by the visions of the night he lost everything dear to him. Fueled by a desire for revenge against Ares, along with a need to redeem himself among Hades to earn salvation, Kratos manages to break free of his imprisonment and sets out on a journey to kill the Furies. If he can successfully defeat them he can sever all ties to Ares without consequence.

In God of War: Chains of Olympus, one of the final challenges is called Challenge of Hades. Hades himself does not appear, although Kratos does enter his realm of the dead, the Underworld. Hades does, however, play a background role, as husband to Persephone, the main antagonist of the game. Persephone doesn't love him but is forced to remain in his dark realm. Because of this, she had chosen to end both her life and that of the Gods by freeing Atlas and commanding him to kidnap Helios, the God of the Sun, from the sky and use his power to destroy the Pillar of the World.

In God of War, he manifests in Pandora's Temple in a translucent form, like the other gods, and gives Kratos a magic called the Army of Hades. Only his fiery, demonic face is seen. There is also a giant statue of him in the section of the Temple called The Challenge of Hades, as well as another statue of Hades alongside Zeus and Poseidon in Pandora's Box's Elevator.

While Hades doesn't appear in Betrayal, he is, again, a background character. When Kratos starts chasing the mysterious Assassin, the Undead Legionnaires and Cerberus appear from Underworld to stop him. Kratos wondered why Hades sent these beasts to attack him, speculating that Hades is the one who is plotting to ruin Kratos' relationship with the other gods. This would have made sense since Hades already had a legitimate reason to hate Kratos for the death of his wife Persephone. (Note: Betrayal is not considered part of the canon.)

Hades is first seen amongst the congregation of Gods on Mount Olympus, dropping down to join Hermes and Helios in the battle against the Titans saved and led by Kratos scaling the mountain. He is briefly seen dislodging his uncle Oceanus from the mountain after Kratos disabled one of the Leviathans attacking Gaia. Kratos encounters Hades personally in the Underworld, who seeks to prevent him from escaping again. After first entering, Hades periodically comments Kratos' actions, often in a sarcastic, humorous or taunting tone of voice.

As soon as Kratos enters his Palace, Hades takes a more hostile stand, claiming he senses "some bad blood" between them. Before the battle, Hades reminds Kratos how he has wronged him in the past, by killing Athena (his niece), by killing Poseidon (his brother), and especially Persephone, his wife and "Beautiful Queen". Hades then threatens, "I will see you suffer as I have suffered! Your soul is mine!".

Emerging from the darkness, Hades immediately attempts to steal Kratos' soul but fails. An intense battle ensues, during which Kratos and Hades do battle with their respective chain blades. Eventually, the blades become entangled, and Hades attempted to pull Kratos into the River Styx. Eventually, Kratos gains the upper hand and uses both weapons to form a noose around Hades' neck, repeatedly slamming his uncle's head into the ceiling and knocking him into the River Styx seemingly killing him. From this, Kratos obtains the Claws of Hades allowing him to steal souls. Eventually, a significantly bigger Hades bursts out of the river using the soul to maintain him self, no longer sporting his helmet, revealing a deformed, devilish, cracked skull.

After a fierce duel Kratos manages to rip out his soul, using his own Claws killing the God of the Underworld once and for all. As Hades' rule of the Underworld lifts, the tormented souls of the Styx swarm over Hades, dragging him into the depths of the river. Kratos, in possession of Hades' soul, is now free to traverse the River Styx unharmed. As a result of Hades' death, the souls of the dead that reside in the Underworld were able to roam freely, with many escaping the Underworld itself. After diving into the river, the godly possession, Hades' helmet, can be retrieved at the bottom, near the point of entry. It then becomes available during Bonus Play. Before leaving, Hades' corpse can be seen at the bottom of the Styx, mutilated, as the tormented souls tore a passage through his gut to escape the river.

Swimming through Hades' now open torso, Kratos follows them and returns to The Forge of Hephaestus, the Blacksmith God. Hephaestus asks how Kratos could be alive and if "Lord Hades" rules no longer, to which Kratos responds, "The God of the Underworld is dead!" Hephaestus is shocked by this and states that he thought that the death of Hades was impossible, to which Kratos responds, "Olympians overestimate themselves." Hephaestus replied, "I will keep that in mind, Spartan".

Hades is one of the four god mentors of God of War: Ascension's Multiplayer. His statue is the second one in the Rotunda of Olympus.

Warriors aligned to Hades have great physical powers (being rivaled only by warriors of Ares) and increased cooldown reduction, too, but lack defenses (again, only being less weak than Ares). But these are not their best advantages: being considered the best Multiplayer allegiance many times, the secret of these warriors is their ability to steal health from enemies and specialty in escape and stealth techniques. A particular item offered by the Underworld God is Hades' Helmet, which allows players to stay invisible from other players for some time.

Warriors of Hades are literally the living nightmare to anyone from the opponent team when fighting seriously, and must focus on using surprise attacks in order to have an advantage in battle. Before taking strong blows, they can use their items to perform effective escapes and when injured, they can also use their magic to drain nearby enemies' vitality.

Can drain health from enemies and perform surprise attacks in certain special attacks.

As the ruler of the Underworld and everything that resides within it, Hades is both the oldest of his siblings and one of the most powerful of the Olympian Gods surpassed only by his brothers Zeus and Poseidon. Hades is naturally a force to be reckoned with by any being who is foolish enough to anger him. His will alone is the absolute authority in both the gloomy realm itself as well as all other areas that are under his control; Nothing happens in the realm without his knowledge of it.

Unlike his brother Zeus and many of the other Gods of the series, Hades is mostly unconcerned with the affairs of the mortal realm, preferring to focus his energies on the Underworld. He is, however, quick to anger if someone crosses him or his family, which makes him an enemy of Kratos. As Kratos is traveling through his palace, Hades comments that there is bad blood between them, as Kratos had murdered his niece (Athena) and his brother (Poseidon). He also appeared to have deeply cared for Persephone, despite her words and treachery. Indeed, he has restored her remains and created a massive memorial to her. He doesn't comment on the loss of his nephew Ares, indicating that Hades, much like the other gods, did not care much for Ares. This means that, unlike most of the other Gods, Hades cared for his family.

Hades had a sinister, sadistic, mock-playful humor, evident in the way he taunts and intimidates Kratos throughout the Underworld. This is similar to the mythological Hades, who often gave out ironic punishments to particularly unfortunate souls. He also appears to be a masochist, as even when Kratos beats him senseless and tears away chunks of flesh, he claims to enjoy the pain.

Like most Olympians, he has no respect for the mortals he has shown in the wager of the gods. He sent a plague to Alrik's father to force him to compete in the wager just for his own amusement and when he lost he convinced Alrik to seek revenge on Kratos, unintentionally setting in motion the events of the series.

Hades During The Great War

Hades as seen in the comics 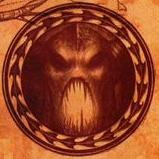 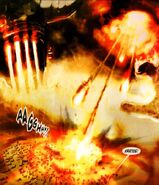 Hades raining death on Kratos and his army. 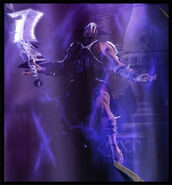 Retrieved from "https://godofwar.fandom.com/wiki/Hades?oldid=114418"
Community content is available under CC-BY-SA unless otherwise noted.