God of War Wiki
Register
Don't have an account?
Sign In
Advertisement
in: God of War (Comics), Monsters, Males,
and 6 more

Gyges is one of the three Hecatonchires. He is a hidden antagonist of the God of War (comics).

Gyges is one of the three Hecatonchires. Having fifty heads and one hundred arms, massive size, and deformed bodies, they are hideous creatures that are the sons of Ouranos and Gaia. Gyges is the brother of Briareus (also known as Aegaeon) and Cottus. Ouranos banished them to Tartarus for their appearance. They helped Cronos defeat Ouranos, only to be banished once again. The cycle completed itself once again, as they helped Zeus overthrow Cronos, and finally became the guards of Tartarus.

After arriving on the island where the Ambrosia is being kept, Kratos encounters a waking, yet angry Gyges, one of the three Hecatonchires, who was the island itself and has remained dormant. The Hecatonchires (while trapping Kratos in his vines) revealed that he had been awaiting Kratos' return.

Gyges then revealed his intentions of using the Ambrosia to revive his brothers and taking control of the world. He soon belays his desire of vengeance on Kratos due to the fact that on the Spartan's first quest for the Ambrosia, a hundred of his arms were burned off in his battle with Helios' Champion, after which he vowed vengeance for Kratos' actions as he was forced to go through a very long healing slumber to await the second time Kratos would seek the Ambrosia. He states now that he has awoken, he will achieve his goals of world domination and vengeance on Kratos who assumed godhood in his time of slumber. Kratos, however, escaped the vines of Gyges and revealed that he intended to destroy whatever Ambrosia left on the island, as disciples of Ares desired to use it to revive their fallen God. 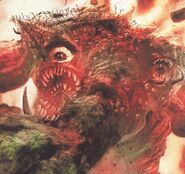