God of War (2018)
Gunnr is one of the nine corrupted Valkyries and optional side bosses in God of War. Located in Thamur's Corpse, the game is guiding the player to fight this specific Valkyrie first and with good reason. Gunnr ranks as the easiest of all nine foes and is excellent practice for the difficult battles ahead.

Gunnr is a fairly easy Valkyrie to take down, possibly due to the fact that she's likely the first of the 8 hidden Valkyries that players might find without prior extra challenge (Gondul being at the peak of Muspellheim gauntlet should have players anticipate a fight tougher than ususal). She has a relatively low health and stagger resistance.

Gunnr's strategy all comes to her closing in on Kratos and slicing him with her Scythe, be it on the ground or from the air, both of which are susceptible to Guardian Shield's counter. While her Scythe attacks wont exactly go through Block, it can break one, making Kratos vulnerable to follow up slashes.

She might occasionally attacks with her blockable Wing Slashes and finish the combo with a close-range and rather telegraphed Wing Thrust, which is the only attack from her that player should dodge. 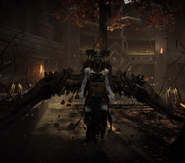 Retrieved from "https://godofwar.fandom.com/wiki/Gunnr?oldid=116356"
Community content is available under CC-BY-SA unless otherwise noted.