God of War Wiki
Register
Don't have an account?
Sign In
Advertisement
in: Monsters, Pandora's Temple, God of War: Ascension,
and 12 more
English

Unlike their Greek mythological counterparts, the Gorgons in God of War appear more serpent-like altogether. Plus, instead of being just three, they are a race of beings. However, there are still three main Gorgon sisters who rule all others: Medusa, Euryale, and Stheno.

In Greek mythology, a Gorgon (derived from "gorgos", meaning terrible) was a monster that was known to have the ability to turn onlookers into stone. It was said that there were three Gorgons, two immortal (Euryale and Stheno) and one mortal, Medusa, they had hair made of living, venomous snakes that they received as punishment from Athena, Medusa's image has become famous. Originally, Gorgons were humanoid creatures with boars tusks, rooster feet, brass hands and bronze wings (as well as hair made of living snakes). In modern times, they were portrayed to have the lower body of a snake thanks to the well-known Medusa from 1981 movie, Clash of the Titans.

Gorgons appear in God of War: Ascension, however, they look very different to how they have previously appeared as they now have cobra hoods and reptilian faces. These gorgons are slightly more colorful than the ones that have appeared previously in the series. They appeared in Village of Kirra, The Furnace, and Trial of Archimedes. If they stunned the gorgon, Kratos slam the gorgon on the ground and grab the gorgon's head unleash the gaze and the enemies will petrified whoever they near. If Gorgons weakened (red halo), Kratos kills these by slicing their heads vertically in half, all the way down to under one of the breasts, instead of decapitation.

Multiplayer: In Trial of the Gods, they can be fought in the maps Rotunda of Olympus, later updated in Coliseum of Persia, and Labyrinth of Daedalus. Sometimes, if they stunned (golden halo), warrior grab gorgon's head and unleash the gaze to the enemies, and if gorgon weakened, warrior will perform finishes the gorgon like Kratos did. However, the finishing move is the same as the one used on the Gorgon Serpents from God of War III.

Stheno, the third gorgon queen, appears only in the Multiplayer of God of War: Ascension. She resides in the Bog of the Forgotten and can be awakened by the Shield of Perseus, and then controlled by players on the platform above her head.

In the early design of the Bog of the Forgotten in Multiplayer, these Hooded Gorgons were supposed to reside on the lower levels, attacking players who ran by.

The Gorgons appear in this game as enemies, in the Underworld. They can attack the Spartan warrior by whipping him with their fast, deadly tails, or by turning him to stone with their deadly gaze. After weakening them, Kratos can kill them by throwing them to the ground, and ripping their head off with his bare hands. Later on, in the Temple of Persephone, Kratos is assailed by a more powerful breed of Gorgons known as the Gorgon Queens.

During the siege on Athens, the Gorgons were a part of army of Ares, and participated in the attack on Athens, under the leadership of their Queen, Medusa, who hated Athena. The goddess Aphrodite ordered Kratos to kill and decapitate Medusa in order to use her head as a weapon against his enemies. All the Gorgons Kratos encountered would always put up a fight against him, gazing upon him and trying to turn him into stone. A more powerful breed of Gorgons, known as Gorgon Assassins, also appear in the game.

Beginning in the city of Heraklion, Gorgons appear throughout the game as dangerous foes. They move swiftly, can wrap themselves around Kratos, and, of course, turn him to stone with their deadly gaze. Kratos can kill Gorgons by grabbing onto them, beating them to the ground, and effectively decapitating them with his blades. Killing Gorgons by this means will also create a radial 'blast' that can freeze any nearby enemies to stone.

Angered by Kratos for killing Medusa, her sister Euryale, an even more powerful Gorgon Queen, awaited his arrival as he journeyed through her temple. This Gorgon appeared massive in size, being far more grotesque and powerful than any other Gorgon Kratos had encountered. She was ultimately defeated when Kratos tore her head from her body, using it as a weapon, like he used Medusa’s head before. Kratos also encountered regular Gorgons, but less frequently. He only came across them in the Lair of Typhon, the Bog of the Forgotten, near the Phoenix Chamber, and on the path to the Loom Chamber.

Early on, Kratos came across a large breed of Gorgons known as Gorgon Serpents. Later in his quest, Kratos eventually encountered standard Gorgons, which were quicker and stronger than their Gorgon Serpent sisters. After weakening Gorgons, Kratos can grab them and rip off their head. This time, doing so will also allow Kratos to instantly freeze all other surrounding enemies. 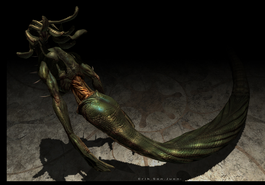 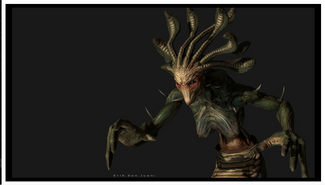 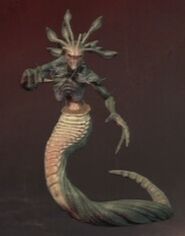 They are first encountered in God of War, first in the Challenge of Atlas and later on throughout the rest of Pandora's Temple. They return in God of War II, and dwell within the Bog of the Forgotten and other parts of the Island of Creation.

The Gorgon Queen is the most powerful breed of Gorgon that Kratos encounters in the God of War series. They are encountered towards the end of the games. They also are the leaders of the Gorgons, however, the true matriarchs of their race are Medusa, Stheno, and Euryale. Although Stheno did not appear in the God of War Series, Euryale said Kratos killed her sisters, implying Kratos might have killed Stheno (off screen) as well as Medusa. However, on another note, she may as well been referring to the basic Gorgons, perhaps considering them as "siblings".

In Chains of Olympus

Gorgon Queens are encountered in the Temple of Persephone, and are similar to the standard Gorgons, except they are purple colored rather than green, and are also partially adorned in decorative jewelry. They also have the ability to coil around Kratos and instantly turn him to stone.

Gorgon Queens are like the lesser types of Gorgon, only they are even stronger, faster and have a more powerful gaze. They also have a new ability in which they launch orb-like projectiles from their eyes that can "follow" Kratos and instantly turn to stone if they hit. They are encountered within the inner part of the Temple of the Fates. They are very similar in appearance to Medusa from the first God of War, as they are red in color and also have a "normal" stomach between their tail and chest, opposed to the skeletal thin stomachs of the other Gorgons. Kratos can also kill them the same way as he kills the standard Gorgons.

Gorgon Serpent are a breed of Gorgon that Kratos confronts in God of War III. These Gorgons appear larger than most of their brethren, with yellow and white serpentine bodies, and a rattle on their tails. They are first encountered during Kratos' journey through the depths of the Underworld. One way that they attack Kratos is by constricting him in their coils, and then turning him to stone if he does not escape quick enough. Once Kratos initiates the kill sequence, he will stab his Blades into their body and pull them back to him as they try to slither away. Eventually, he grabs a bunch of their snake-like hairs and pulls them back so he can cut their head off. Upon decapitating a Gorgon Serpent, Kratos will use its head to turn all nearby enemies into stone. He also receives Blue Orbs by killing them this way.