God of War Wiki
Register
Don't have an account?
Sign In
Advertisement
in: God of War Series, God of War (Comics), Other Media,
and 2 more
English

DC/Wildstorm presents the game-to-comic graphic novel in a bi-monthly 6 part series, first released in May 2010, with its final issue released March 2011. The story arc depicted Kratos' childhood, his rise through the Spartan Army and the events immediately following his crowning as the God of War. Set after God of War and before Ghost of Sparta, (with flashbacks set before Ascension) Kratos is on a mission to find and destroy the Ambrosia of Asclepius, a talisman of limitless healing capabilities.

Kratos, before his rise to the throne of the God of War, was hailed as the Spartans' greatest soldier. In his splendor, he saw a humble and timid woman named Lysandra. He immediately fell in love with her, and wed her. She eventually bore him a daughter they named Calliope, but, much to their horror, the child was infected with a disease; Spartan law dictated that all diseased or weak infants shall be hurled into the chasm of Mount Taygetos and left there to their demise.

As Spartan soldiers stormed Kratos' home and attempted to take his newborn, Kratos defiantly unsheathed his sword, prepared to defend his daughter. However, a nearby elder informed Kratos of a possible way to heal his daughter's illness: the healing elixir of the Gods, the Ambrosia of Asclepius. The Spartan quickly persuaded his comrades to allow him to search for the Ambrosia within a set number of days, promising that once he would retrieve it, he would not only use it to cure his daughter, but any other ill newborns Spartan mothers would bear it.

In his journey, Kratos entered a cave and encountered a strange healer who granted him with a powerful weapon known as Apollo's Flame. The Spartan then traversed deeper into the cave, where he encountered an enormous Phoenix capable of speech. The Phoenix told Kratos that his daughter would not be saved and he would burn in the fires of Hades. Kratos told the beast "You will die and Calliope will live" Kratos and the Phoenix battled in the cave, which ended in the beast's brutal defeat.

Kratos exited the cave after the battle and saw a group of Spartans riding towards him on horseback. The leader of the crew, Nikos, stated that the King of Sparta sent them to aid Kratos. The warriors then set off, while, in a faraway land, the Prince of the Barbarians, Alrik, saw his father suffer from a serious illness which confined him to his bed. Upon hearing of the Ambrosia and its mystic healing powers, Alrik and his Barbarian army set off to find it as well.

However, unbeknownst to both warriors, the Olympian Gods had created a wager in which various mortals (who are completely oblivious to the Gods' involvement) were selected to capture the Ambrosia, spreading diseases throughout their lands and everything they held dear as incentives; the God who chose the mortal who would capture the Ambrosia first would attain victory. Ares, God of War, had chosen Kratos as his "champion," while Hades, ruler of the Underworld, chose Alrik as his.

The God of the Sea, Poseidon, had chosen a Theran warlord named Herodius as his champion. The Theran sought to rescue his land from a plague secretly deployed by Poseidon and turned to the Ambrosia as the cure. After defeating a group of Satyrs, the Spartans came across Herodius and his ship. The Spartans and the Therans then ferociously battled, which ended in the defeat of Herodius and his men.

Kratos and his soldiers then commandeered the ship, but, Poseidon, infuriated that his champion was slain, attempted to kill the Spartans using his powers over the oceans. After summoning his Hippocampi to send the warriors into the ocean, he then created a whirlpool which nearly drowned Kratos and his crew. After Kratos was sent deeper into the ocean, a massive serpent suddenly appeared from the shadows, but was cut into pieces by the warrior, who then proceeded to lead his men to land, much to Poseidon's chagrin.

After which, Nikos and Kratos debated on whether or not the men should rest. The squabbles of the two attracted the attention of a Kerosian warrior named Pothia, champion of Artemis, who also sought after the Ambrosia due to the fact that the children the women of her tribe bore were stillborn. The Kerosians battled Kratos and his army, but were, too, defeated.

Meanwhile, Alrik and his men encountered a man named Danaus, commander of animals and champion of Hermes. Danaus sought after the Ambrosia, for the livestock of his land were afflicted with a plague. Unfortunately, Alrik decapitated the man and took his disembodied head with him in his journey.

Kratos and his crew made their way into a desert, where Hades, in a move of desperation, fired gigantic balls of fire from the sky annihilating half of the army one of the fireballs nearly hits Kratos but Nikos pushes him out of the way at the cost of his own life . After burying the fallen and paying their last respects, Kratos and his men finally made it to the Tree of Life, the very tree which held the Ambrosia. Suddenly, Cereyon, the pyrokinetic champion of the Sun God Helios (and the only champion to know of his god's selection), challenged Kratos, but was quickly trounced.

The warriors, with the Ambrosia finally in their grasp, rejoiced and prepared to return to Sparta. Unfortunately, Alrik and his Barbarians suddenly arrived, and the two armies clashed over the healing elixir. Alrik then unleashed Danaus' head and used its power, commanding a nearby flock of Rocs to tear Kratos and his Spartans apart. Luckily, Kratos overcame the beasts' attack, but Alrik escaped on a Roc, with Ambrosia in hand.

Hades, still unwilling to allow Ares to claim victory over the wager, sent the arms of death to destroy Kratos and his men. A determined Kratos leapt onto a nearby Roc and callously abandoned his men, all of whom died, begging for their leader not to abandon them.

Kratos eventually caught up with Alrik, and their battle led to them having fallen from a devastating height, onto the ground. The two warriors found themselves wounded, dazed, yet alive; the Ambrosia spilled on them both during their struggle. Kratos then grabbed the head of Danaus, and commanded other Rocs to swoop down and rip Alrik to shreds.

Kratos flew back to Sparta on a Roc and barely managed to save his daughter from being thrown off a cliff. Kratos then healed his daughter with the Ambrosia. Impressed, the King of Sparta promoted Kratos to the title of a Captain. Meanwhile, Hades revives Alrik and the barbarian returns home to find out his father had succumbed to his illness and died. Being manipulated by Hades and watching his father being cremated he took up the mantle of Barbarian King, and Alrik vowed vengeance on Kratos giving birth to the events to come.

After defeating Ares and becoming the new God of War, Kratos traverses the Underworld in search of the Ambrosia once again. After entering a cave, he encounters a gigantic arachnid capable of speech. The monster battles Kratos, only for the latter to destroy the spider's eggs and utterly crush the beast. He questions the arachnid on who sent it, but it dies from its wounds before it can relay any information.

As Kratos continues his journey, Athena appears to him in the form of a spectral image, and warns him not to continue this, for it is now "the dead he must fear." Kratos, however, stubbornly shrugs off her warnings and presses on, only to encounter the dead bodies of the Spartan warriors he abandoned many years ago, which inexplicably rise from the dirt, and, armed with rusted weapons, battle Kratos, only for their former leader to defeat them mercilessly.

Kratos finally made his way back to the island of the Ambrosia, and, once he stepped on the ground, the island came alive and revealed itself to be a giant beast known as Gyges, one of the three Hekatonkheires. Son of Ouranos, but abandoned because of his grotesque appearance, Gyges plans to take over the Earth and rule it alongside his brothers. He seeks revenge on Kratos due to the fact that the Spartan's battle with Cereyon burned off his one hundred arms.

Kratos escapes Gyges' clutches and reveals his true intentions: because the disciples of Ares seek to utilize the Ambrosia to revive their fallen God, Kratos seeks not to capture the Ambrosia, but to destroy it. Gyges begged Kratos for mercy, as the Ambrosia kept him alive, but Kratos cruelly continued his onslaught, and ultimately destroyed Gyges by burning him to death using the Flame of Apollo.

As Gyges died in agony and fire, Kratos left the area, knowing full well that Ares' followers will hunt him down for ruining their last opportunity to revive their fallen God. 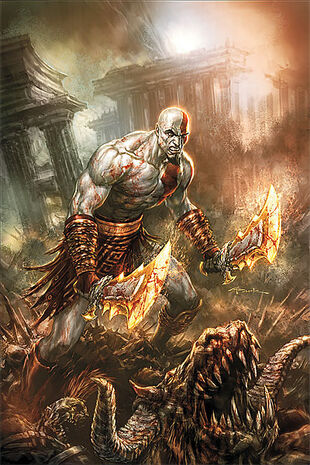 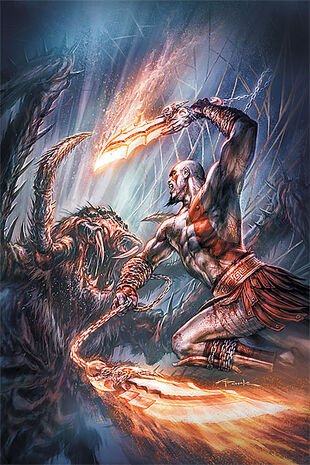 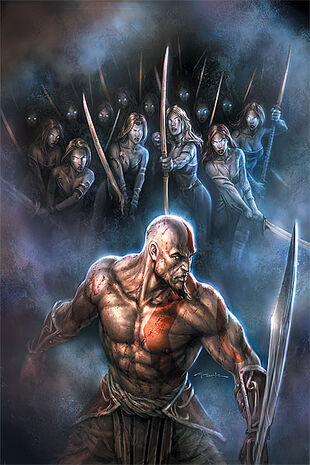 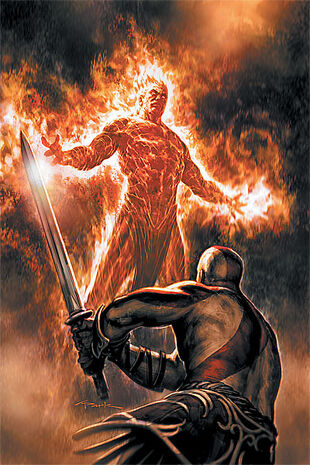 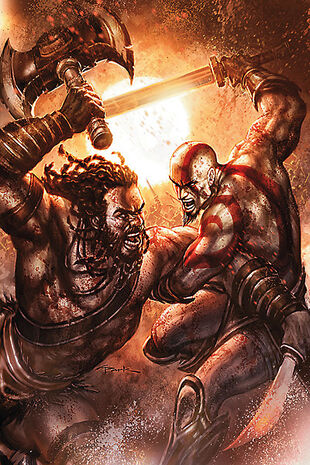 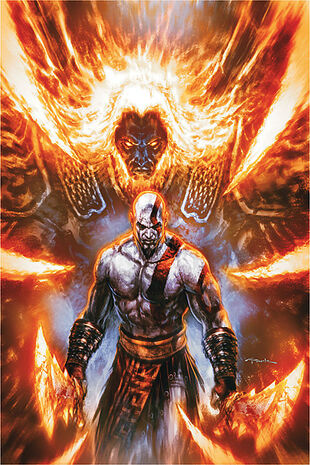