God of War Wiki
Register
Don't have an account?
Sign In
Advertisement
in: God of War Series, God of War: Ghost of Sparta, God of War II,
and 6 more

View source
watch 01:54
Arcane: League of Legends - The Loop
Do you like this video?
Play Sound

The God of War Armor appears as a costume in Ghost of Sparta, God of War II and Soulcalibur: Broken Destiny.

The original God of War Armor, as Kratos wore it in the beginning of God of War II.

One of the first bonus costumes decided upon including with the game was the God Armor. Developers have also revealed Kratos will wear the armor in-game at some point, before being able to unlock it. Another interesting bit of information about this armor is that Deimos' armor features some striking similarities.

This costume decreases the amount of damage Kratos receives from enemies, doubles the damage he deals with Blades of Athena, Thera's Bane and the Arms of Sparta and also double the fire meter regeneration time. Although the Combo Time increases by x2. Finally, it also causes enemies to drop Red Orbs as Kratos hits them with attacks. The God Armor is unlocked by beating the game on any difficulty.

If the player chooses God Armor when starting a new game, the player will notice the color of Blades of Athena turns to black and red, similar to when the blades are engulfed in Thera's Bane (glyphs remain blue in normal mode) and shine gold when reflected by light.

With the god armor, The Bonds of Ares and Aphrodite's Ambrosia; Kratos effectively becomes the semi-god of war (as he hasn't attained full godhood which is seen at the end of the game) as the bonds grant him infinite magic, the ambrosia grants him superior physical attack, 'The Might of Sparta', the armor reduces the damage taken from enemies at a great deal which keeps Kratos almost immortal. All of the privileges that suit a god of Olympus. Using the god armor, the bonds and the ambrosia allows the player to beat the game in a godly style.

This is the outfit Kratos wore when he attacked Rhodes and fought the Colossus of Rhodes, only now to be worn indefinitely, granting the blue Blades of Athena as well, though the chains remain red oddly enough. After the Colossus injures Kratos, the armor is almost completely destroyed, save for Kratos' loincloth and footwear. The God Armor is described as "You worked so hard to get it the first time. It would be a shame to let it go to waste." After receiving the appropriate ranking in Challenge of the Titans, the armor is unlocked and the description changes to "Wear armor of the God of War to inspire fear in your enemies."

Wearing this costume doubles all of Kratos' stats, making it the most advantageous costume in the game. The God of War Armor here is unlocked by receiving a ranking of "God" or better in Challenge of the Titans.

The God of War armor serves as Kratos' secondary costume.

The armor looks very similar to the armor Kratos wore as the captain of the Spartan Army, and in God of War III for the "Dominus" costume. 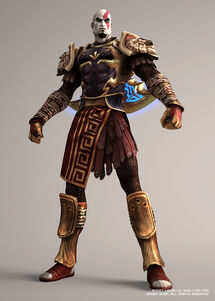 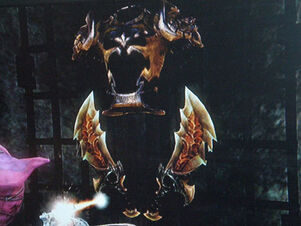 The tribute to the God Armor in Heavenly Sword. 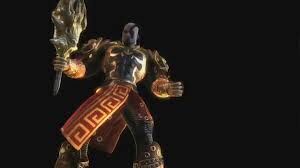 The God Armor as it appears in PlayStation All-stars Battle Royale.
Community content is available under CC-BY-SA unless otherwise noted.
Advertisement