God of War Wiki
Register
Don't have an account?
Sign In
Advertisement
in: Items, Kratos' Weapons, God of War: Chains of Olympus,
and 4 more
English

The Gauntlet of Zeus was a gigantic gauntlet that was forged by Hephaestus and was used by Zeus to chain the mighty Titans in the depths of Tartarus. It was given to the Jailer of Tartarus to protect, and only he had the Key to the Temple of Zeus.

In God of War: Chains of Olympus, Kratos found and obtained the gauntlet in the Temple of Zeus. The gauntlet was a weapon of the Gods that could deliver devastating blows to opponents, shatter solid stone and iron (when possible, the materials glowed blue, like the gauntlet itself with every attack), and was deadly even to Immortals. Kratos used the gauntlet to battle and kill Persephone. After the battle, Kratos fell from the sun chariot he was riding, while still equipped with the Gauntlet of Zeus , but safely lands in a cliff. The gauntlet is last seen, along with the Sun Sheild being taken away by Athena and Zeus to Olympus.

The Gauntlet of Zeus made another appearance in God of War: Ghost of Sparta. In the Combat Arena, playing as the Grave Digger allowed the player to transform into Zeus, who held the Blade of Olympus in his right hand and the gauntlet was worn on the left. The gauntlet had similar attacks in God of War: Chains of Olympus. 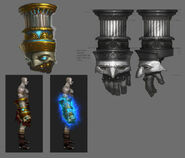 Original Concept Art of the Gauntlet of Zeus.